In the ongoing court drama between Epic Games vs. Apple, new documents have emerged that suggest that Epic Games approached Sony for first-party exclusives.

This document is dated for September 2020 so it is fairly recent, but it appears that Epic was interested in getting the exclusive first-party games from the big three: Nintendo, Sony, and Microsoft. The document also reveals that Valve’s Gabe Newell and Microsoft’s Phil Spencer are meeting frequently suggesting they might be partnering on something. There is a rumor going around that Game Pass could head to Steam but it hasn’t materialized for now. 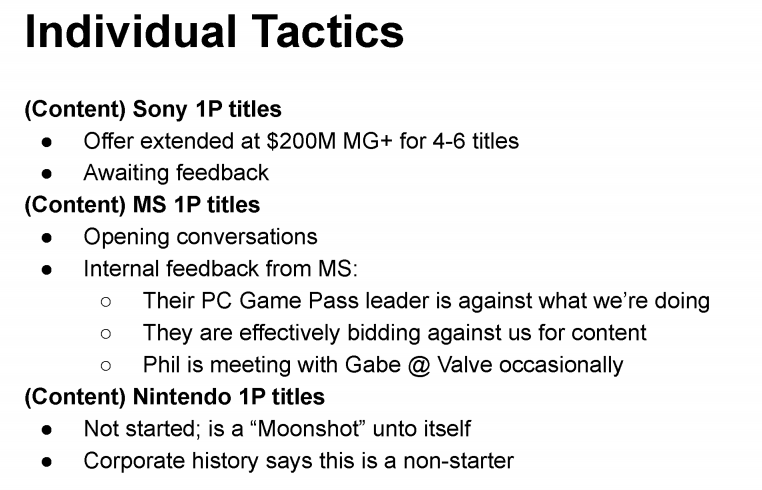 The deal that Epic offered to Sony was for 4 to 6 of their first-party games. It would cost them $200 to bring them as exclusive to their Store. However, judging by how Days Gone has also launched on Steam, it can be argued that this deal couldn’t make the cut perhaps.

The slide also mentions Microsoft suggesting that they are not ready to work with Epic. The slide also suggests that Microsoft is actively bidding against Epic Games to get more content for their Game Pass subscription. The other interesting portion of the slide is the mention of Phil Spencer and Gave meeting “occasionally” which we can assume could be for some project or deal between both corporations.

As for Nintendo, the slide is actually hilarious when mentioning them. The opportunity to get Nintendo to release their first-party games on EGS is considered as a “Moonshot” and their corporate history is also mentioned.