Starfield has more than 250,000 lines of dialogue, which is the equivalent of over twice of the dialogue seen in Fallout 4.

In a video on Bethesda Softworks’ official YouTube channel titled “Constellation Questions: Talking Starfield with Todd Howard”, Howard answered some key question regarding the studio’s upcoming NASA Punk RPG. According to him, Starfield has over 252, 953 lines of dialogue, which is more than twice of the dialogue seen in Fallout 4.

252, 953 voice lines is a very specific figure, but it looks like that’s the exact number of voice lines that have been recorded for the game thus far, with more to be added leading up to the game’s release in the first half of 2023. For the sake of comparison, Fallout 4 had a total of 111,000 lines of dialogue, while The Elder Scrolls V: Skyrim had 60,000.

Howard also mentioned that Starfield will return to what he terms a “classic Bethesda” style of dialogue, where you’re looking at the character and how they emote, and you have a series of dialogue choices to work with. The scope of the game, the amount of content that Bethesda is making is a bit more than the studio has done before in terms of quests. 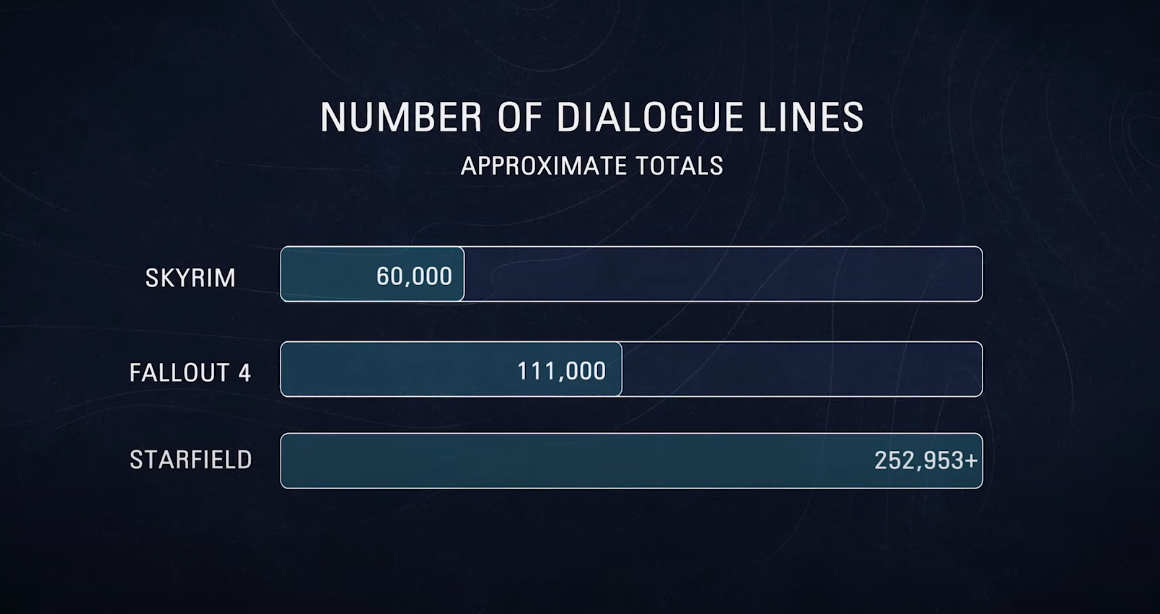 Previously, it was revealed that Starfield may support RTX features on PC. According to the LinkedIn profile of Bethesda Game Studios Graphics Programmer Germain Mazac, a part of his responsibilities while working on Starfield was the handling of RTX integration. In addition, his profile also states that he worked on both PBR Lightning and Indirect Lightning for the game.

If Starfield does indeed support a suite of ray tracing features, it wouldn’t come as particularly surprising, given that Nvidia often seeks to have RTX features in big budget and popular releases. Being Bethesda’s latest major release after Fallout 4 and Fallout 76, it certainly fits the bill. As for which particular RTX features the game will support is anyone’s guess. Being a massive open world game spanning across many planets, Starfield could benefit greatly from Ray Traced Global Illumination (RTGI)