The Pathless Review – Journey of the Wild

The Pathless is developer Giant Squid’s second game after the artsy and captivating Abzu. While the latter was more of an experience, The Pathless is an open-world action-adventure game that strives to be an unlikely cross between thatgamecompany’s Journey and Breath of the Wild.

You assume the role of a hunter whose world is on the verge of collapse, as the ancient spirits who once defended it are now under the curse of a powerful being known as the Godslayer. It’s up to you to restore order and peace in the realm and ultimately defeat the Godslayer. The island is large and there are several regions to explore, but the game doesn’t hold your hand and tell you what to do next. There’s no world map either, and your only guide of sorts is spirit vision, which highlights points of interest in the distance. The highlighted areas often contain environmental puzzles that can be completed to obtain a special golden orb. Once enough of these have been obtained, you’ll be able to activate three dormant towers that allow you to confront the area’s cursed spirit.

The hunter can effortlessly dash across the landscape, but doing so quickly depletes her stamina gauge. To replenish it, you must use her bow and arrow to shoot talismans scattered everywhere throughout the world. Luckily, she’s a master archer, and keeping the right trigger pulled for a short while automatically locks on to her nearest talisman. It’s an incredibly satisfying mechanic that quickly becomes second nature, as you learn to maintain a continuous rhythm and flow to build momentum and speed. The Dualsense controller’s adaptive triggers create an impulse just as you get a lock on a talisman, serving as your cue to shoot your arrow. This further aids you in developing a rhythm without necessarily having to look for visual cues.

This mechanic is further expanded later on, with certain special talismans giving a more pronounced boost or having you take off. This proves useful since you’ll often be required to take to the skies with the help of an eagle. Your trusted companion will help you glide and gain altitude by flapping its wings a limited number of times per time you take off. As a result of the added verticality, exploring the open world feels more enjoyable and less restrictive. The eagle will also play its part in solving puzzles that require key objects to be fetched or moved around. Occasionally, your companion will get cursed and you’ll need to call upon it to clean it up. It’s a neat mechanic that further develops sentimental attachment for the eagle. 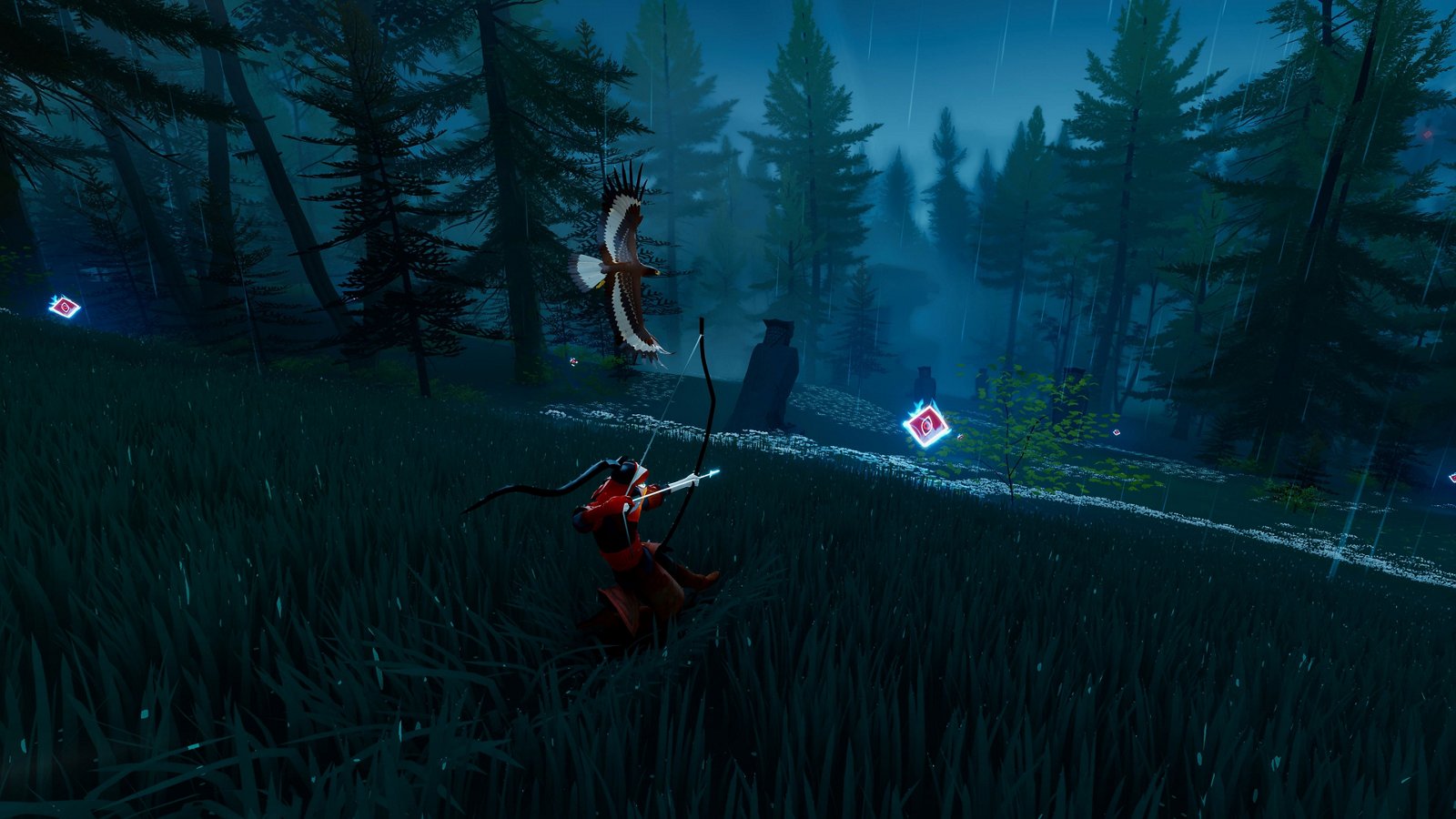 Puzzles are reminiscent of the shrines from Breath of the Wild. While most of them are fairly simple, they’re well designed, making each golden orb you acquire feel earned. Fundamentally, it boils down to things like shooting arrows at objects to open doors, ricocheting them off mirrors to reach the target, and melting frozen objects by shooting an arrow through a torch. You’ll also be required to use your spirit vision to pass through areas that are seemingly blocked by walls. The eagle will also help with realigning mirrors on rails to set up a precise ricochet spot for your arrow.

While it isn’t mandatory to complete all available puzzles to activate the three towers and progress to the next section, there is an incentive to do so. The game’s true and conclusive ending can only be unlocked via 100% completion. This may sound overkill, but given the short nature of the game, it’s worth pursuing. It helps that the exploration and puzzle-solving here are generally enjoyable. 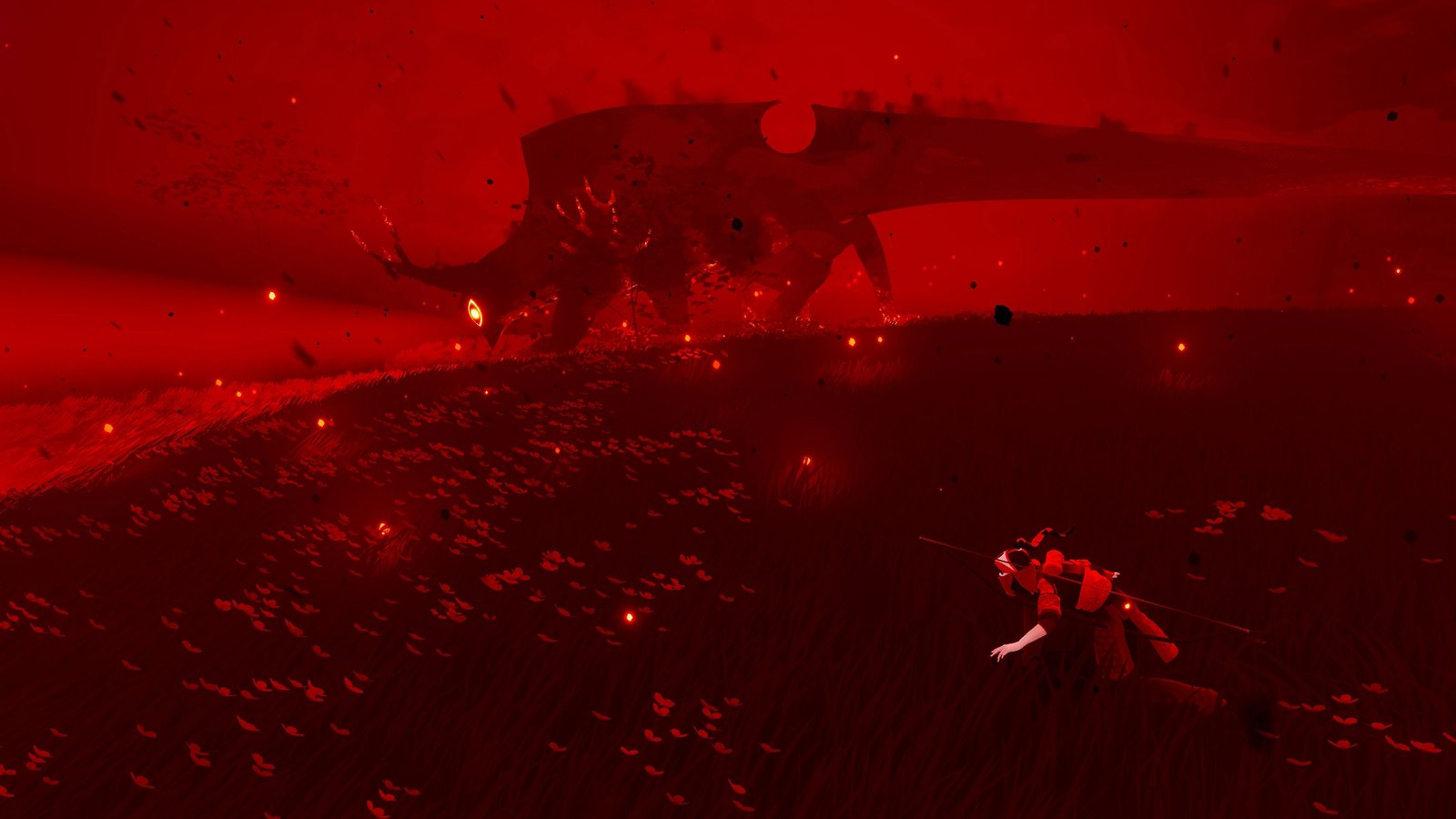 The game’s lore is conveyed through notes left by the dead or slabs of text scattered throughout the world. They’re generally worth a read, as you’ll learn more about the Godslayer’s past and his intent. Another side activity involves collecting shards that fill up a gauge, which, once maxed out, allows the eagle to gain greater altitude while carrying the hunter.

During your quest to activate the three towers of a region, you’ll occasionally run into its corrupted guardian spirit. It’s here that you get pulled into hostile territory and lose sight of your eagle companion. In order to get through this predicament, you need to stealthily make your way to the distressed eagle while avoiding movement when present within the corrupted beast’s line of sight. Should you get caught, you’ll lose some of the shards you’ve collected. These stealth sections are the only real intrusive part of the game, as they quickly become a chore after a couple of encounters. 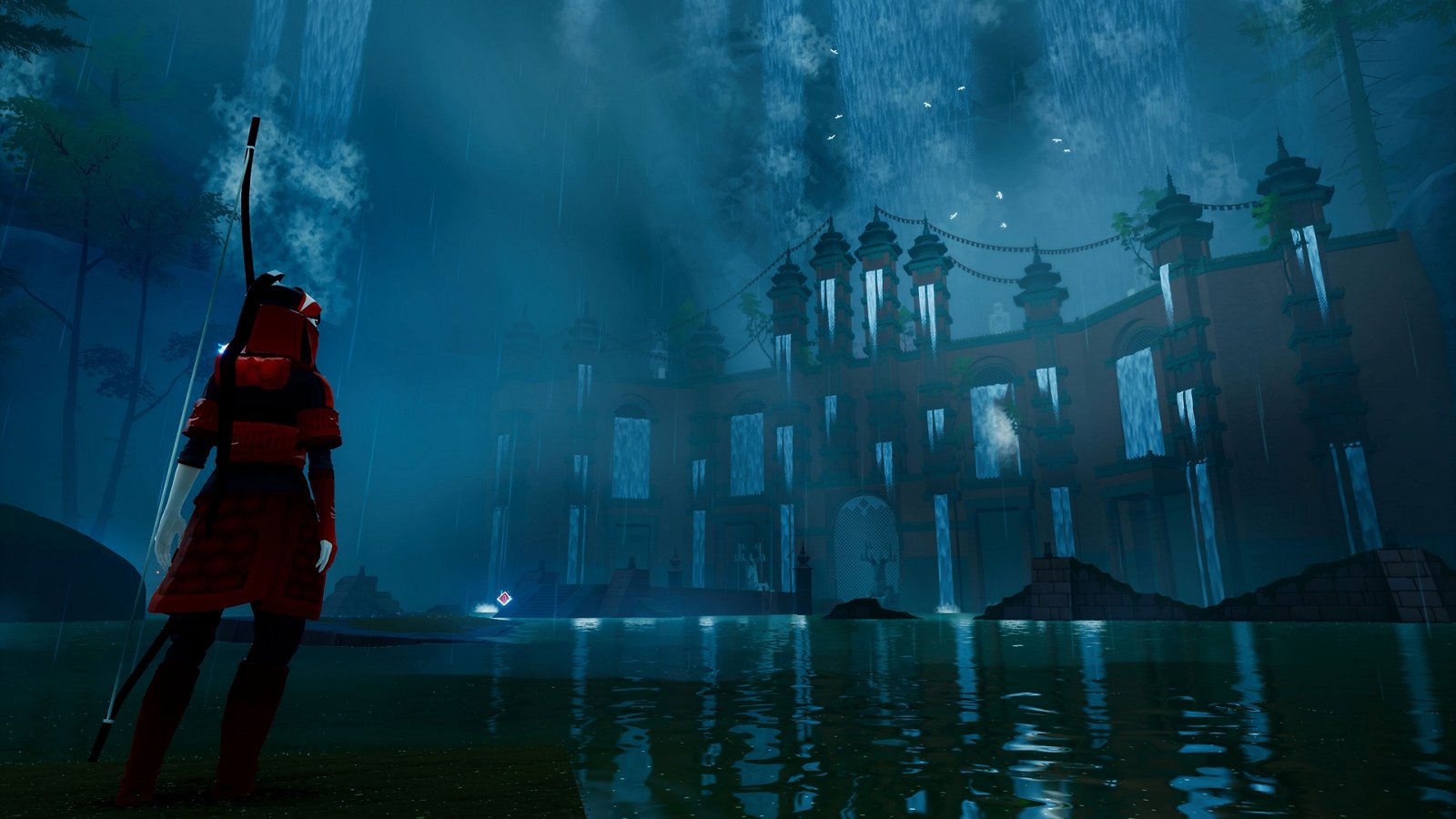 Boss fights are a nice change of pace from the exploration and puzzle-solving. They play out in multiple stages, the first of which involves you chasing down the beast and shooting at its weak spots as it tries to outrun you while sending fireballs your way to slow you down. The second part of the fight takes you to a more traditional arena-like section, where you face off against the beast. As with all boss fights, you’re expected to observe their attack pattern and exploit vulnerable instances. However, these encounters are deliberately kept simple to not become a major hurdle. There’s no game over screen either, so, at worst, you get thrown out of the arena. Making your way back in resumes the fight from where it left off.

Minimalist and eye-catching is the best way to describe The Pathless’ aesthetic. There isn’t much in the way of environmental variety, but that doesn’t take anything away from the experience. The art direction is on-point, and the world beckons to be explored. Much like in Journey, Austin Wintory’s compositions for The Pathless do a fantastic job of creating melancholic vibes, perfectly complementing the atmospheric allure of the visuals. 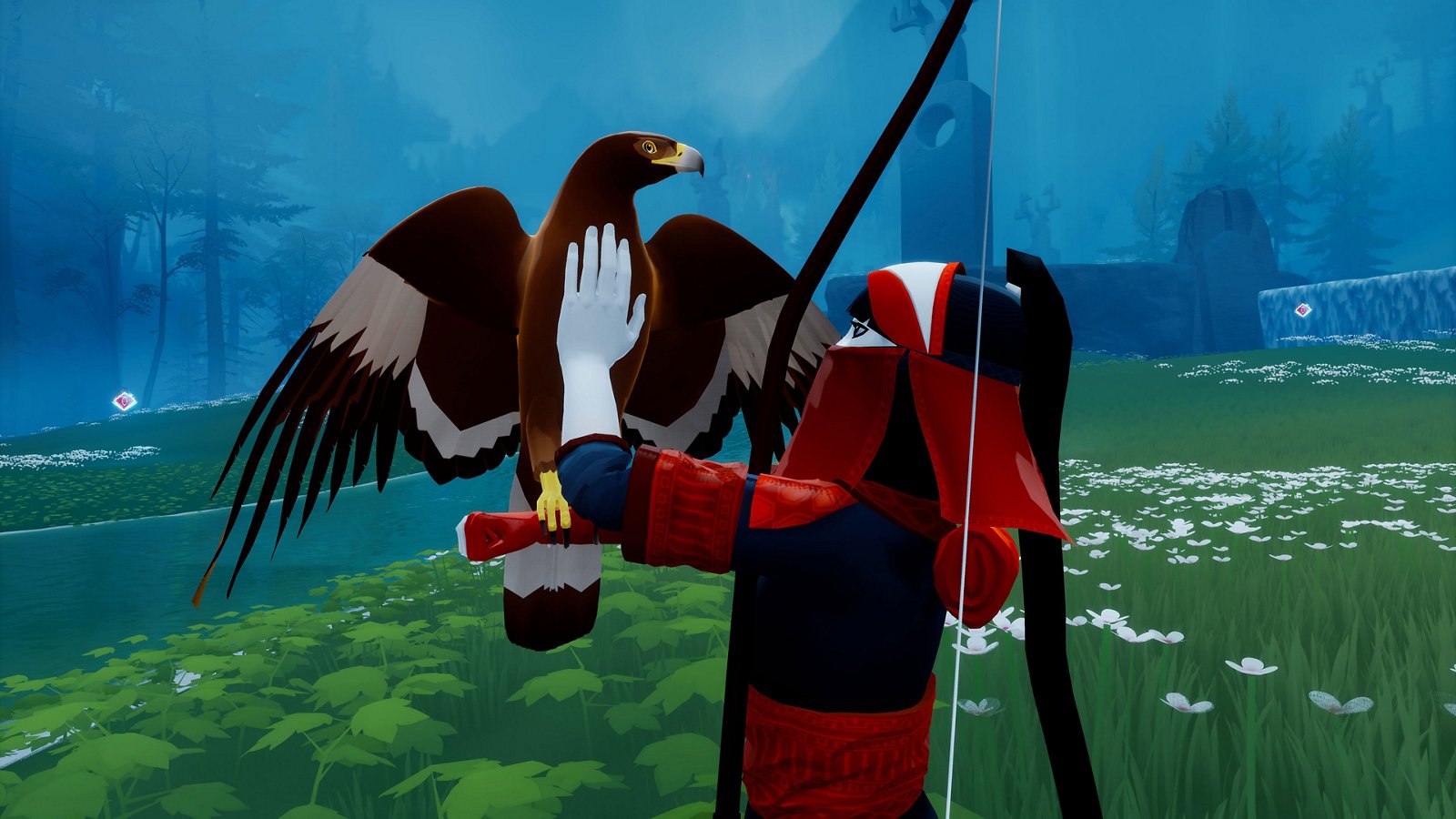 All in all, The Pathless is a well-designed and engaging experience to the very end. It’s mechanically fluid and brimming with atmosphere, thanks to some great art direction as well as Austin Wintory’s fantastic compositions. Despite some repetitive stealth sections that hurt the pacing, the open world is often a joy to explore.

The Pathless is a short but well-designed open world game that doesn’t overstay its welcome. It’s mechanically fluid, brimming with atmosphere, and often a joy to explore.

8.0
Tags:
Previous Article
The Medium Devs Were Blown Away by How The Game Looks On Xbox Series S
Next Article
Hyrule Warriors: Age of Calamity Has Shipped 3.5M Copies, Highest Sales For a Musou Game

Indie Puzzle I Am Dead From Annapurna Is Coming To PS4 and PS5
Salal Awan June 17, 2021

Stray and Other PS Exclusive Indies Get New Release Window