Mario + Rabbids is an unlikely franchise born out of the love of the Super Mario Bros. series by the creator Davide Soliani. The sequel to Mario + Rabbids: Kingdom Battle is Mario + Rabbids: Sparks of Hope. It is not only a sequel in name, but this new installment goes numerous strides further in gameplay, delivering a more enjoyable experience than the original game. It is one of the best games published this year and without a doubt one of the best Nintendo Switch exclusives.

It’s easy to dismiss such high praise for a game of this level; after all, the combination of Rabbids and Mario is unheard of, and it wasn’t considered to be possible until the tremendous success of Mario + Rabbids: Kingdom Battle. Nonetheless, here we are with a new Mario + Rabbids game that, except for the story, is an upgrade over its predecessor in nearly every way. However, with a game like Mario + Rabbids, the plot is never the focus, and while I appreciated the novelty component of the original game, it is thankfully not overused here, instead being pushed into new realms. 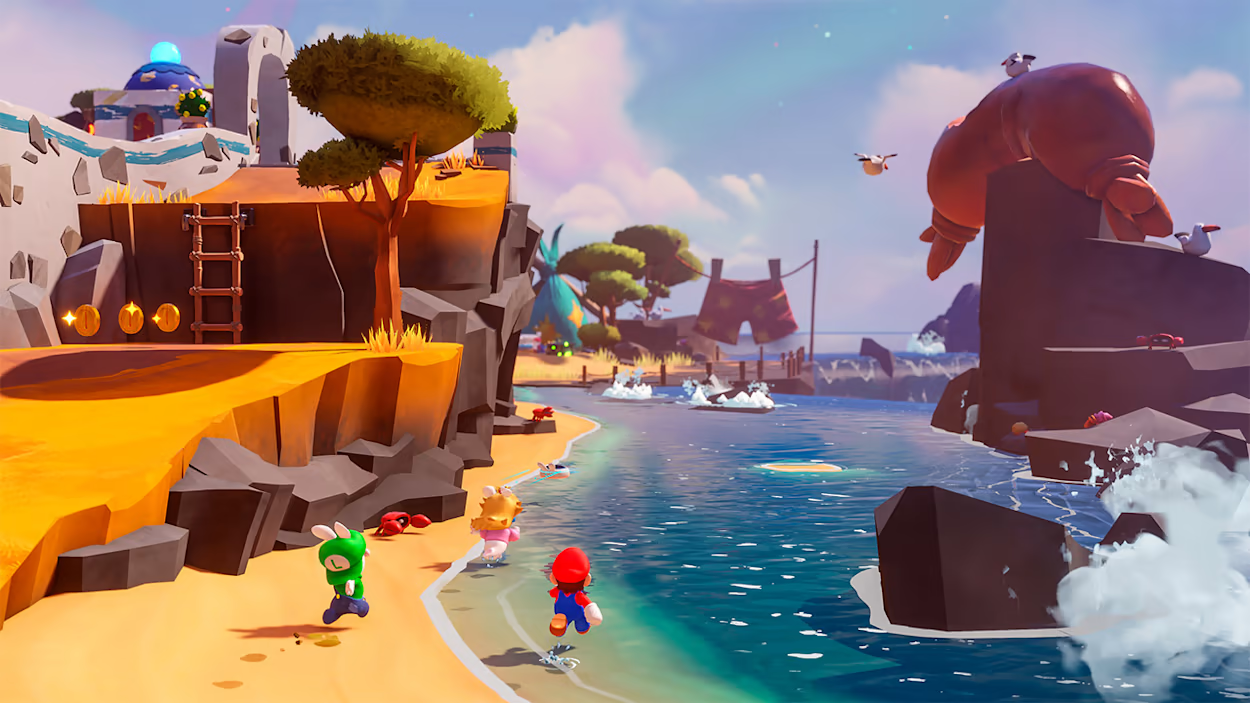 While Mario + Rabbids was largely set in the Mushroom Kingdom and its surrounding areas, Sparks of Hope sends Mario and company into the cosmos to explore numerous planets with their distinct ecosystems and habitats. The game begins traditionally, with Mario, the Rabbids, and others relaxing near Peach’s Castle. They are abruptly cut off by a flying object that looks to be shrouded in darkness. Mario and the rest of the team are plunged into darkness and forced to fight for their lives. The team quickly discovers that this chaos is being caused by Cursa, an entity on a quest to collect all Sparks. Thus starts their journey to repair each planet afflicted by Cursa’s darkness and preserve the Sparks.

Sparks of Hope is a bigger sequel that provides multiple planets to explore, whereas Mario + Rabbids: Kingdom Battle seemed largely like a linear experience with limited freedom. Each of these planets has its own set of missions, creatures, and enemies. They also provide a variable level of difficulty and a diversified level design with various elemental features. If the player simply seeks the main quest, the game may take 20 to 30 hours to complete, but if sidequests are included, overall gaming time might nearly double. When compared to the original game, there is about double the amount of content here, providing good value for money. 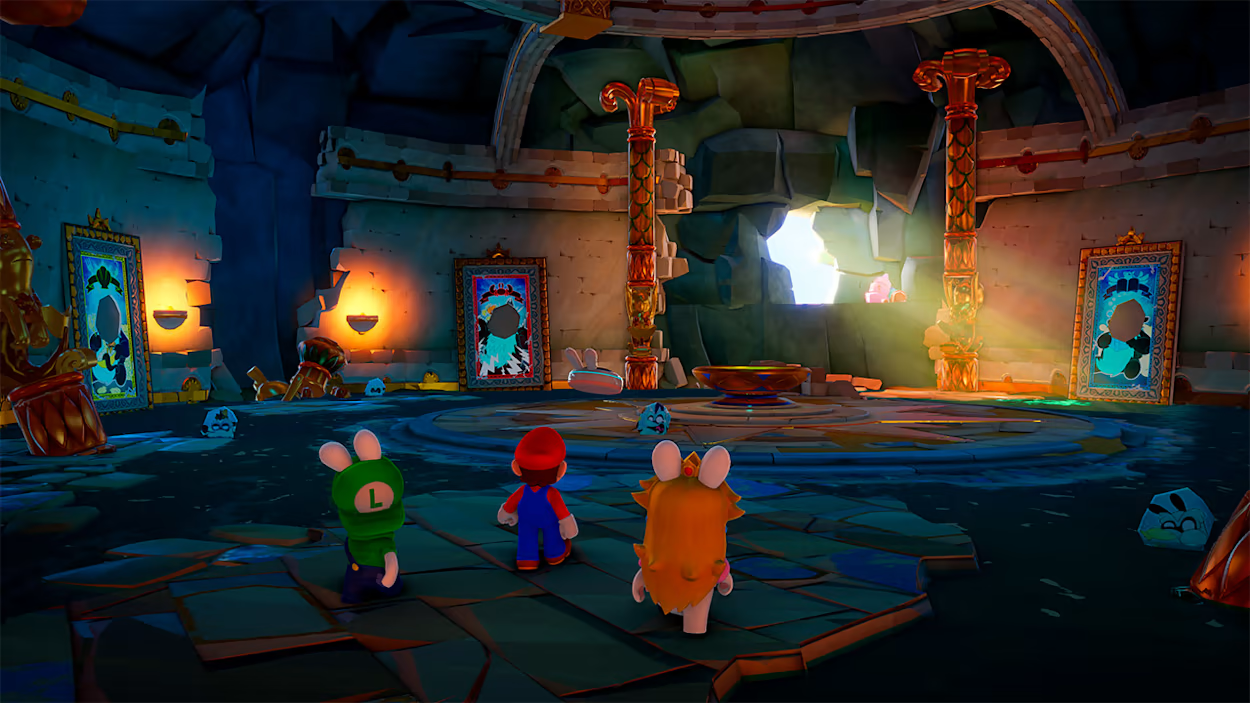 Sparks are new characters in the Mario + Rabbids universe. As described in the opening sequence, they are a hybrid of Lumas and Rabbids. They also have elemental features and stat enhancements that may be used by any character that equips them. Initially, the game only gives a character one Spark, but as the story unfolds, more slots become available, allowing for interesting combinations with multiple Sparks. From the beginning, there are several playable characters to select for a party. From the way they move around the battlefield to their offensive movesets, each of these characters has a distinct advantage in combat. Some are effective at punishing enemies from afar, while others can harm or target many enemies at the same time.

The main difference between the sequel and the first is that it has an open-level design. This implies that players can freely explore the planets, learn their mysteries, complete missions, and gather collectibles. Memories, planet coins, and weapon skins are among the collectibles hidden in each level. These are normally discovered via exploring obscure regions or after the planet has been liberated from Cursa’s darkness. The main quest is entertaining, but the side content is almost as engaging. Because the side content consists of easy exploration puzzles, combat, or minigames, it never seems tedious. 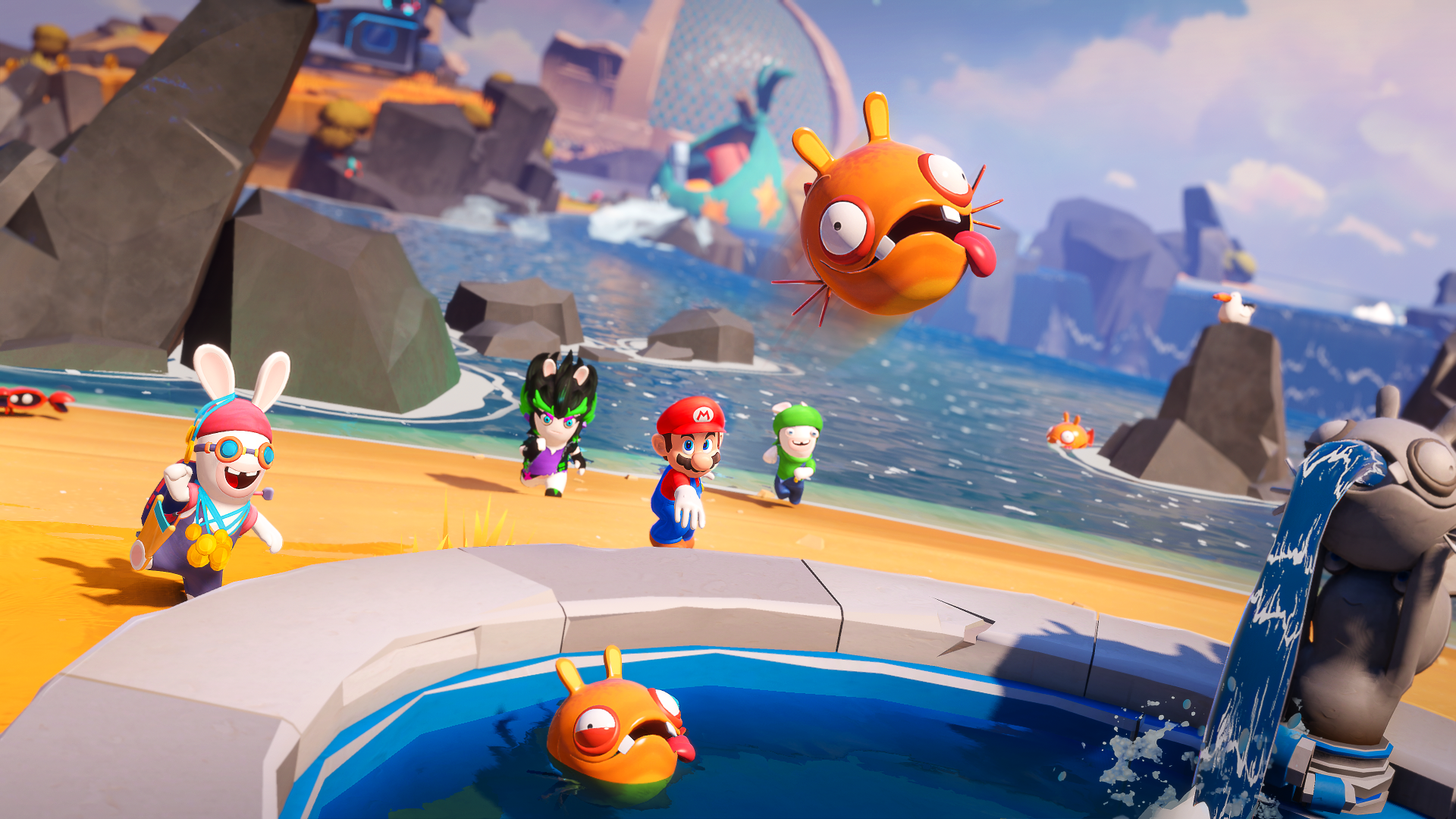 Depending on how the player approaches the planets, each can take several hours. The world map is displayed straight away, allowing you to see all of the available quests as well as the main quest. Some quests will be locked at the start and will unlock as the story progresses, but overall, the game provides a fair balance of side content and the main quest. To be honest, the story isn’t all that engaging, but the hilarious antics of the Rabbids and the self-aware comedy make the journey enjoyable. However, not everything is accessible since part of the content is hidden behind moves that will not be available until a specific point in the story is reached. If you want to complete the game fully, you may always return to a planet with newly found moves to win any of the side quests or collectibles.

While I usually avoid side content in video games, I had so much fun doing it in Mario + Rabbids: Sparks of Hope that it never seemed like a chore. The battles are the finest part of the game, therefore the side content associated with performing additional battles is something I never skipped. Speaking about combat, there are multiple layers to it, allowing players to approach each encounter aggressively or defensively. The main characters can use skill points earned on each level up to gain new powers or upgrade old ones. They are split into four categories: health, movement, weapon, and technique. It is possible to respec them, thus there is no need to be concerned about a permanent upgrade. 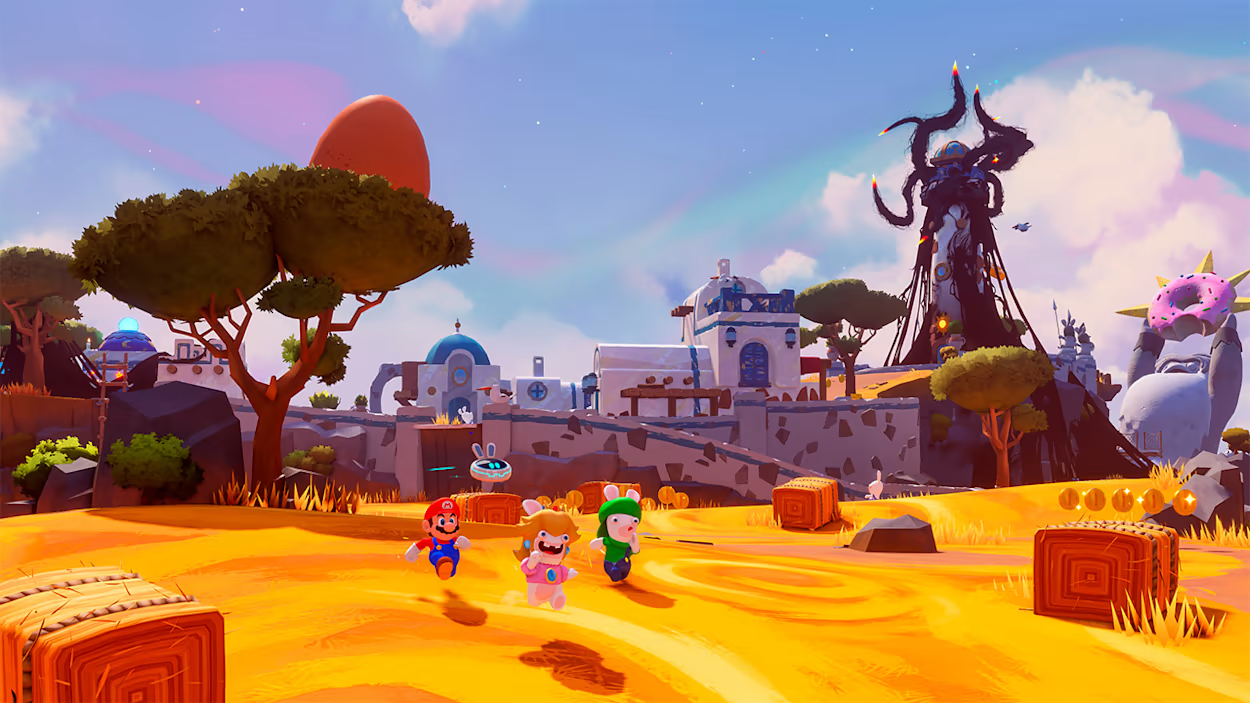 The battle system can be a lot of fun. The combat is quite simple to comprehend. There is a straightforward attack button, two Spark skills, one technique, and the ability to dash and leap on a character to cover more ground and hide behind objects to escape harm. It is a real-time battle with a turn-based system. The player makes a move with their party members first, and then the enemy takes their turn. The battlefield is divided into squares, and navigation is allowed within these grids, with each character having a set amount of space in which to move and attack the enemy. It is essentially an extension of the system seen in Mario + Rabbids: Kingdom Battle. With elemental attacks, Sparks offer a new dimension of strategy to combat. Some enemies will be vulnerable to fire, while others will be vulnerable to water, and so on. The player can exploit this vulnerability and easily defeat the enemies if they employ the ability of a Spark with appropriate elemental attributes.

Aside from the ability to shift to a position on the battlefield, each character has two movements during combat. So, if we choose a Spark skill and then attack, we are essentially using two moves to finish the character’s turn. Similarly, if a technique is performed in conjunction with an item, there is nothing further to accomplish because the character’s turns are already utilized. Techniques and Spark skills can also be used to chain attacks together. If an enemy is vulnerable to water and can bounce after being struck with it, Mario’s technical skill, which lets him aim at any moving object, can be used to perform a combo attack on the enemies. Further improvements in the skill menu enable a character to perform many combos, resulting in a rewarding combat system. 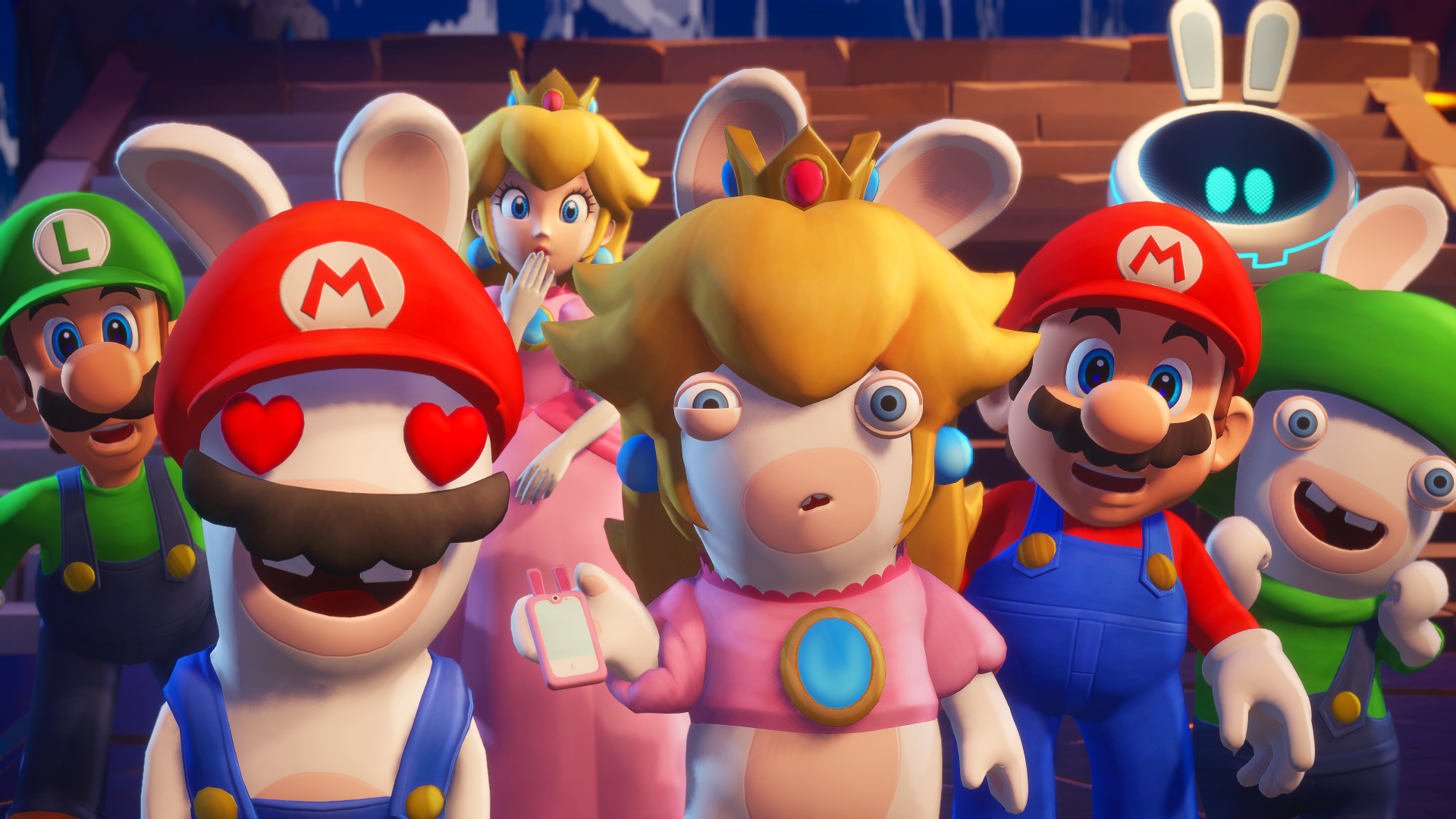 In my opinion, Mario + Rabbids: Sparks of Hope is a good sequel. I couldn’t stop playing the game since the battle system, progression, and level design are all excellent. The main quest is entertaining in and of itself, but the side content is never dull. Some of it may be basic fetch quests like killing X amount of enemies, but most of it is unique enough with fights and entertaining limitations that it is always worth the effort to unlock and finish them.

Mario + Rabbids: Sparks of Hope is a thrilling adventure with some intense strategic battles. It's an excellent sequel that fixes many of the flaws of its predecessor and provides a spectacular journey with hours of entertainment.