XSEED Games in partnership with Grasshopper Manufacture has brought the original No More Heroes games to the Nintendo Switch ahead of the launch of the third entry. If you are a fan of Travis Touchdown and want to revisit his story before playing the latest entry in the series, this is the best way to experience these cult-classic games. Engine Software along with Grasshopper has worked on this port, bringing the original Nintendo Wii version to the Switch thus skipping the controversial PS3 version of No More Heroes.

Travis Touchdown is a memorable character. Across all these years, he has become something of a cult symbol because his personality resonates with a typical gamer. He likes to stay at home all day watching anime or wrestling videos. He is an Otaku at heart that ends up broke after he spends all of his money on a lightsaber during an online auction. The solution to his monetary problems lies with a challenge that he accepts from a mysterious girl after meeting her in a bar. He has to kill the top 10 ranked assassinations in the city which is not an easy job. 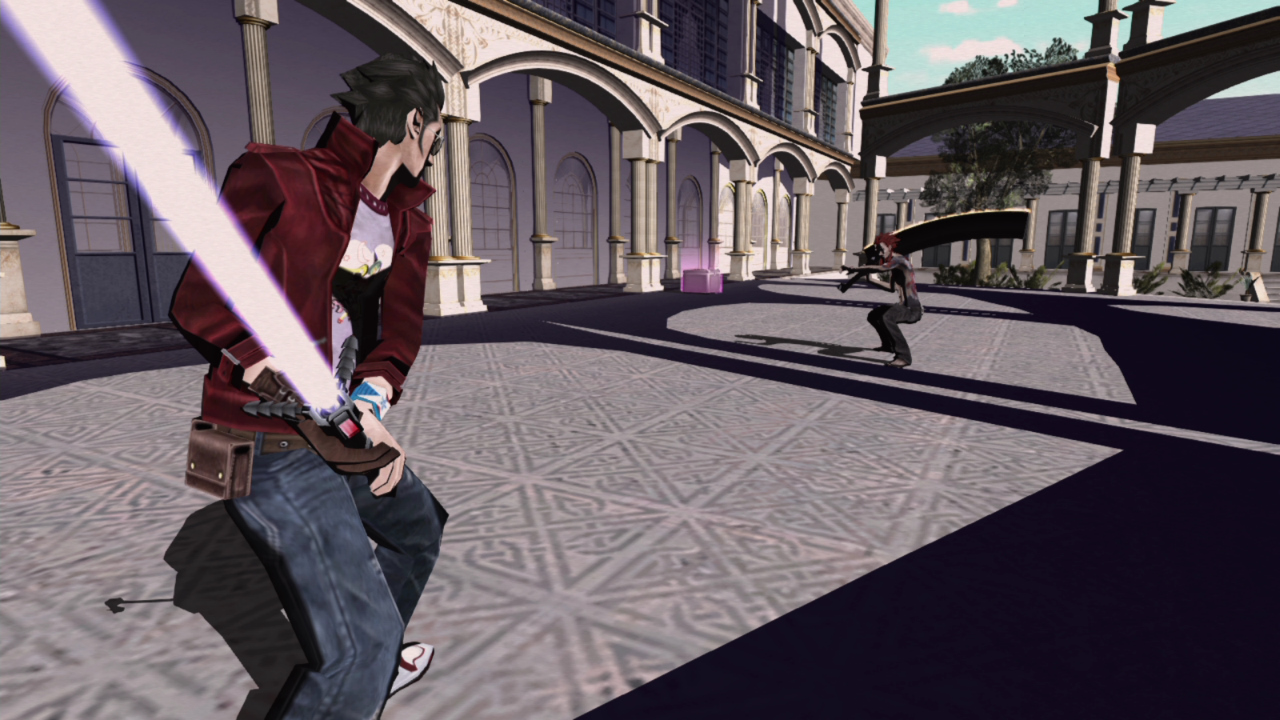 The first No More Heroes is full of cartoon violence and toilet humor. There is a glimpse of a half-baked open world that is unfortunately one of the worst aspects of the game. While the main objective is to fight and kill the top 10 assassinations, the pacing of the story is slow due to the open-world segments where you have to roam around going from point A to B, fighting minions and attempting minigames. The fun factor in No More Heroes comes from the boss fights that are unique and full of memorable characters. Travis’s personality is slowly developed across the course of the story and further flourished in the second game. 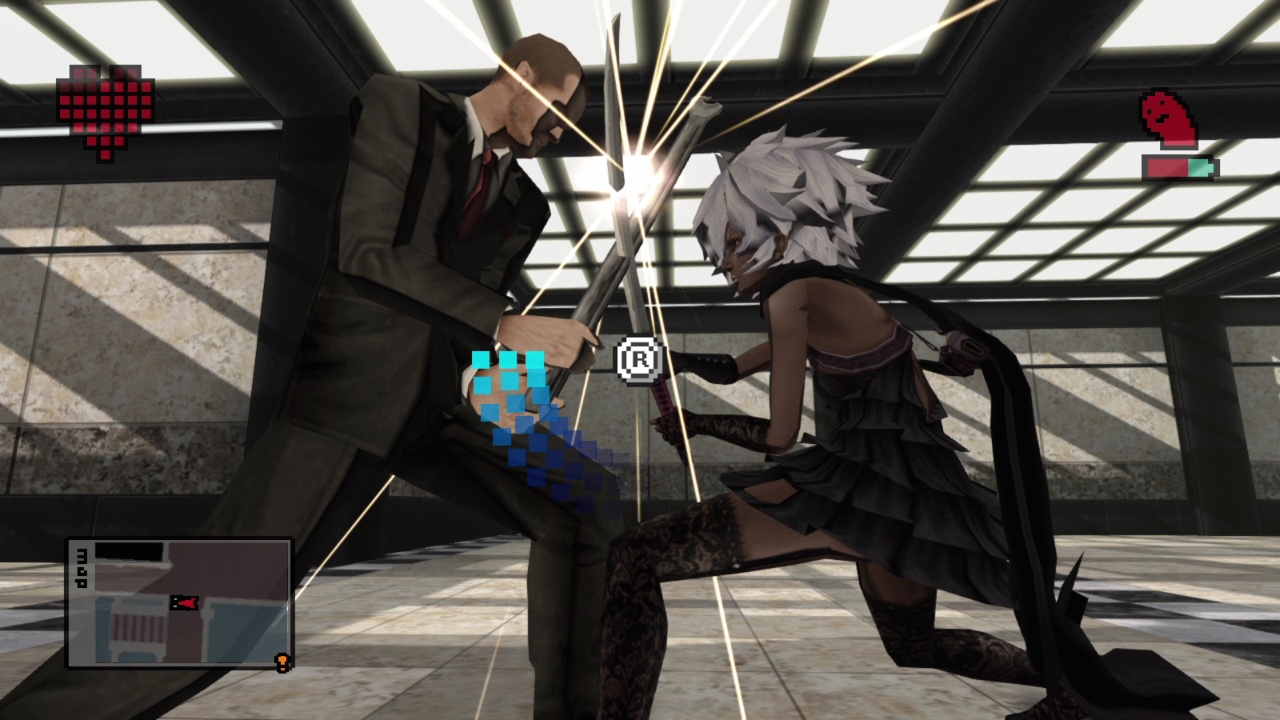 The sequel brings back Travis after he fails to hold up his number one rank in the United Assassins Association and this time has to start all the way from the bottom. The first game offers memorable boss fights but lacks in level and game design. This is rectified to some degree in the sequel where the pacing gets better and the level design is vastly improved, but it is still hard to top the stellar cast featured in the first game. The sequel also sports many interesting boss fights and digs deeper into the complex relationship of Travis and his partner Sylvia. It features improved gameplay but suffers from the flaws of its predecessors as well, including a repetitive combat system. 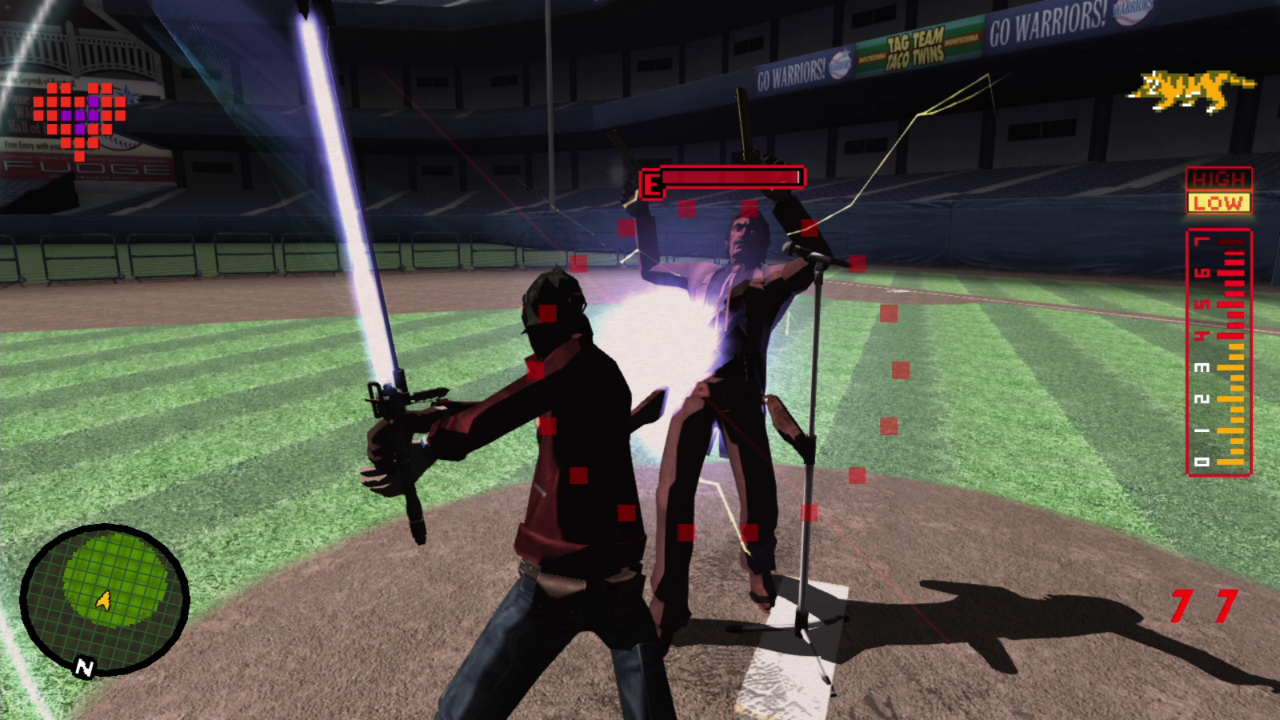 One of the improvements in this port is not just the visuals but the load times are faster. It makes the exploration easier to swallow although it doesn’t raise the fun factor during the open-world segments. Taking that aside, fighting the same enemies gets old pretty fast until the eventual boss fights. These fights are not just insane based on the sheer spectacle and crazy personality of every one of these bosses, they are also unique and feel entirely different from the normal combat encounters.

The visual upgrade is clean enough with a 720p resolution. It might not look like much, but this is a clear upgrade over the 480p SD resolution that was running on the Nintendo Wii. The game now runs at an unlocked frame rate that targets 60 FPS and mostly appears to stay that way aside from minor hiccups. One thing that still looks terrible is the cutscenes. While the gameplay and real-time scenes render at the HD resolution, the cutscenes don’t get the same enhancement and often look blurry and pixelated. They appear to offer the same resolution as the original Nintendo Wii release so they are passable in a sense.

The art style appears to have transitioned well to the HD resolution. This is one of the reasons why the game doesn’t look dated at all to me. It performs and looks the best in the portable mode where everything feels just crisp to experience, while on the big screen in docked mode, the visual flaws are easier to spot, especially some of the low-quality and repeating assets, which are a clear sign of a low-budget game. Regardless, the content in these two games is absolutely fantastic to experience and as fun to play now as it did during their original release on the Nintendo Wii.

No More Heroes 1 and 2 have aged like a fine wine. These cult-classics have found a new life with the definitive way to experience them on the Nintendo Switch.

Previous Article
The Witcher 3 On Switch Was a Nice “Revenue Driver” For CDPR, Performed “Really Well”
Next Article
Netflix December 2020: All TV Shows and Movies Coming To Netflix

Travis Strikes Again: No More Heroes Is Coming To PS4 and Steam
Ali Haider May 26, 2019

Travis Strikes Again: No More Heroes Is Coming To PS4 and Steam