Sony PlayStation is building a new development team, and it is working an unannounced project in collaboration with Naughty Dog.

According to the job summary for a new opening for the role of Senior Producer at PlayStation, the console maker is looking to build a new internal game development team in partnership with PSS Visual Arts, an award-winning, full-production group, that specializes in Animation, Motion Capture, Cinematics, Art, and Scanning. 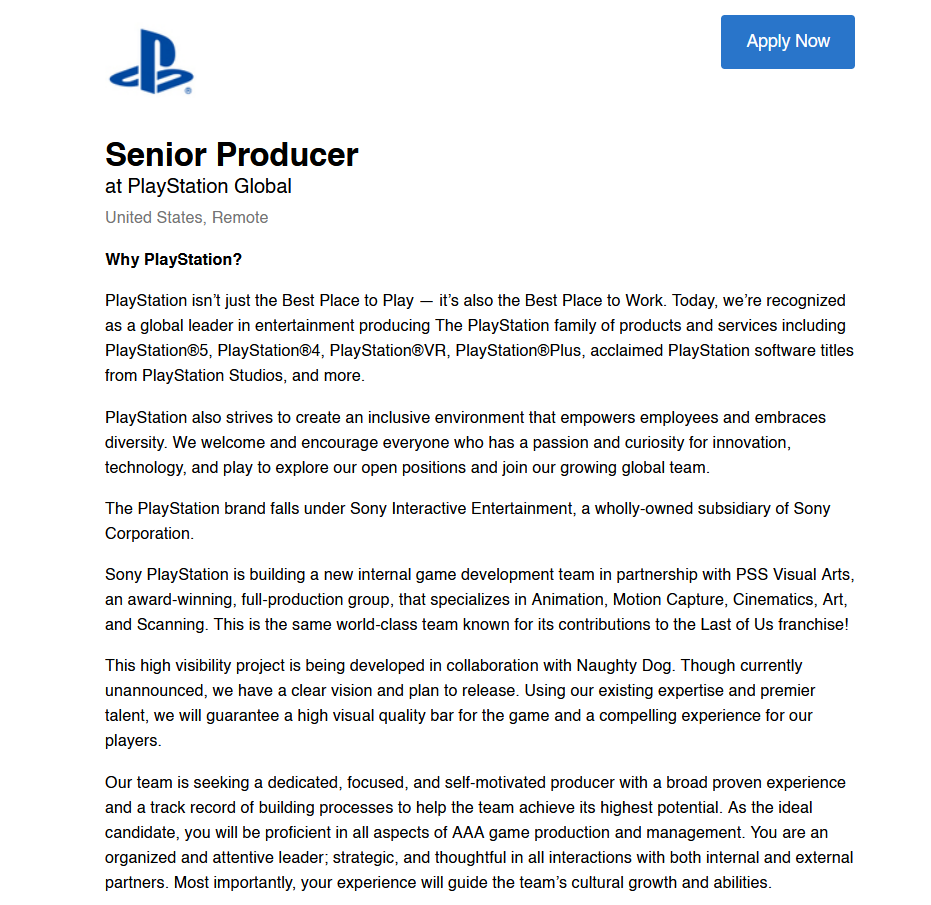 As per the job description, this is the same world-class team known for its contributions to the Last of Us franchise. The new PlayStation studio’s high visibility project is being developed in collaboration with Naughty Dog. Though currently unannounced, Sony claims to have a clear vision and plan to release. Using its existing expertise and premier talent, the studio will guarantee a high visual quality bar for the game and a compelling experience for the PlayStation audience.

According to the job summary, the ideal candidate would be proficient in all aspects of AAA game production and management. They would be an an organized and attentive leader; strategic, and thoughtful in all interactions with both internal and external partners. Most importantly, according to the job summary, their experience will guide the team’s cultural growth and abilities.

Previously, it was confirmed by Sony that it will bring the PlayStation first-party GaaS titles to PC day one alongside the console release, while other exclusives will come a year later. Speaking in an interview, head of PlayStation Studios Herman Hulst revealed that, going forward, there will be at least a year long gap between the release of first-party exclusives on PlayStation consoles and the PC platform.

However, Hulst added that there is one exception to this rule – live service games, which are likely to launch day and date on both PlayStation consoles as well as PC. According to him, live service games are a little bit different in nature, as a healthy and strong community is needed to build engagement right away when such games go live.

Tags:
Previous Article
Star Ocean: The Divine Force Review – A Sequel With Lofty Ambitions
Next Article
The Callisto Protocol Banned In Japan Over Violence, Devs Refuse To Censor The Game