Psychonauts 2 Review – A Great Sequel To An Underappreciated Masterpiece

Psychonauts 2 is a dream game in every sense of the word. The first game was launched in 2005, and the sequel will be released in 2021, resulting in a 16-year gap between the two games. It’s a lengthy journey, especially if you liked the original. While the wait for the sequel was long, I am pleased to say that after playing it, it was well worth every year.

Getting the funding for the sequel was one of the most difficult challenges that Psychonauts creator Tim Schafer encountered. The sequel was meant to be far more open and ambitious than the first. The original Psychonauts did not do well in terms of sales, and while it became a cult classic, it was never enough to justify a larger-budget sequel. Thankfully, the power of crowdsourcing enabled Tim to work on the sequel he desired for Psychonauts, and now that the game has been out, can we say it was worth the time and effort?

The central theme of Psychonauts 2 is Razputin “Raz” Aquato’s life struggles. His entire family worked as acrobats at a circus. Raz wasn’t the only one in his family who had psychic talents, but his father forbade him from using them. He escapes the circus after finding his psychic powers to attend a neighboring summer camp in the hopes of becoming a Psychonaut, an organization of secret spies who can use their psychic skills to save the world. This is the premise of the original Psychonauts.

So, even though the original game had a limited scope, what about the sequel? It does not directly follow the events of the first game, but rather starts up after the events of Rhombus of Ruin, a VR spin-off. There’s no need to worry if you haven’t yet played this VR game. The opening essentially covers the history of the original game and the spin-off, including all of the major plot elements. You can catch up on what’s going on even if you haven’t played the first game. However, because it is so amazing, I urge that you play it first. 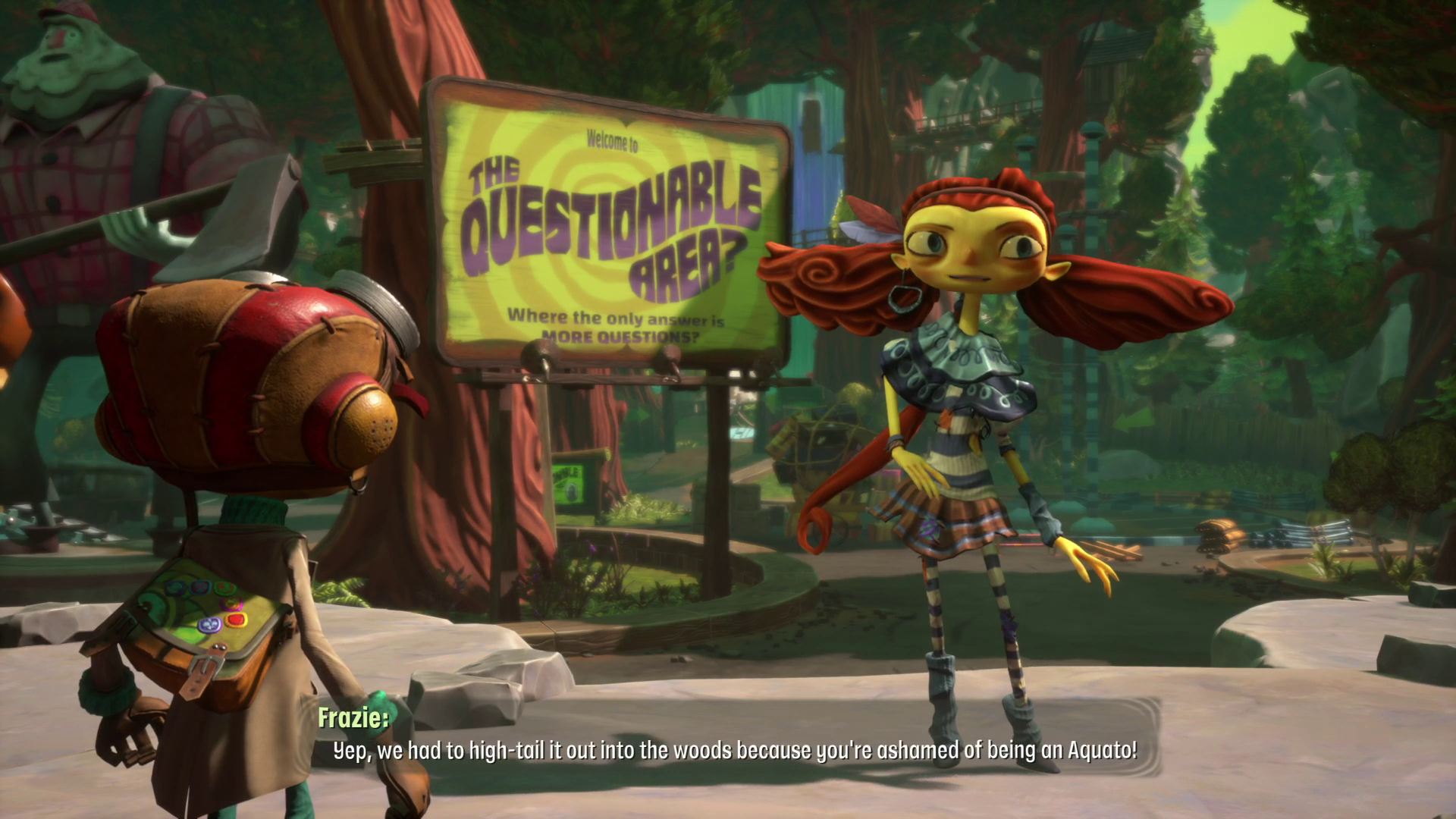 Raz plays an intern at the Motherlobe, the Psychonauts’ headquarters, in Psychonauts 2. During one of his missions, he finds plans to resurrect Maligula, a wicked psychic with personal ties to Raz’s past. Raz must discover the mole inside Psychonaut who is attempting to resurrect Maligula and embarks on a long adventure in which he also meets his family, makes new friends, and battles some crazy monsters.

A Dash of Psychic Powers

For this sequel, Raz has gained new psychic abilities. Some are reintroduced from the original game, while others are entirely new. When Raz is probing someone’s mind, abilities like Mental Connection and Time Bubble allow him to alter his environment. Others, such as Pyrokinesis and Telekinesis, can be employed in battle as well as in the environment. Essentially, all psychic abilities are available during platforming and fighting, although their efficiency and utility vary.

Psychonauts 2 is an adventure game featuring a lot of platforming and a little bit of brawler. You’ll be doing several challenging movements, many of which stem from Raz’s family’s acrobatic heritage. He can swing from ropes, logs, and other objects. He is also capable of climbing vines and nets. The platforming is much more polished now, reducing the clunkiness of the original game. I’d estimate that 90% of the game works just great, however, 10% of the time the platforming causes additional annoyance. Sometimes we just die because Raz fails to grasp a log, even though we have perfectly aligned a jump. These instances are few and far between, therefore I wouldn’t consider them a major drawback. 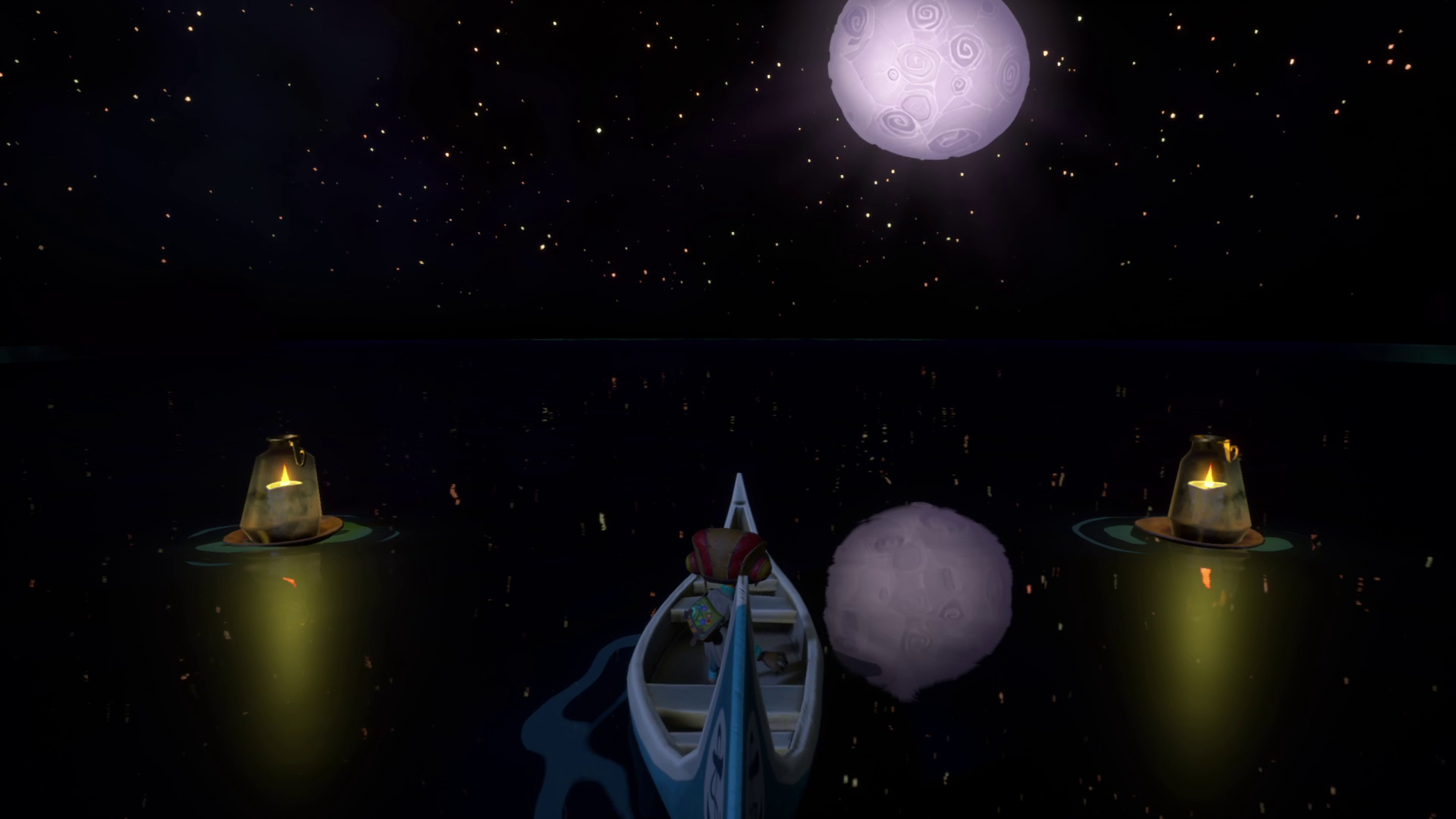 Psychic abilities are employed in both fighting and platforming segments. They can also be used to solve puzzles. When it comes to powers, combat is boring. It is quite easy to get hit and take damage, but as you continue and acquire additional abilities, as well as enhance your existing powers, you will be able to quickly dispatch your enemy. My favorite technique to deal with enemies in the middle of the game was to start on a leviathan ball and then simply PSI-blast them from afar.

An Addictive World With Tons of Collectibles

If you enjoy collectathons, Psychonauts 2 is a must-have game. You’ll be engrossed in the world and looking for valuables. By linking collectibles to progression, Double Fine has given them a purpose. Every rank you achieve as an intern earns you upgrade points. You begin at the bottom and work your way up after completing certain tasks. You can use these upgrade points to hone your talents. This method was so effective for me that I never left a level without inspecting every nook and cranny. Obviously, you won’t be able to discover every collectible because some of them are connected to powers that you won’t be able to access until later in the game. This is why you should remember every inaccessible place and return to it after you have earned the necessary abilities. 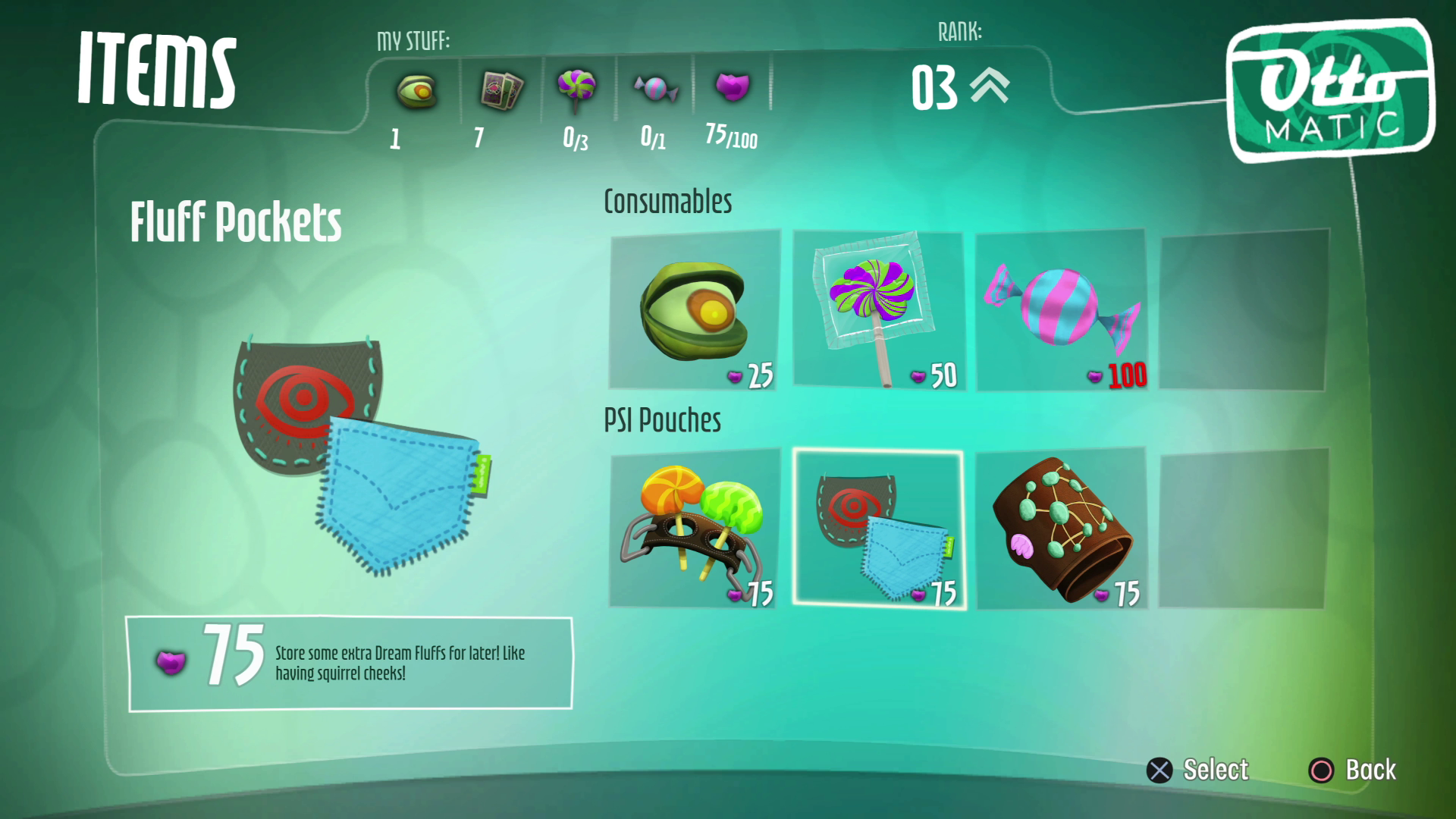 In Psychonauts 2, there are several open levels, each of which contains many collectibles. Some of them are figments that gradually enhance your rank, while others, like half-a-mind, boost your health. You’ll have enough powers to go through the game if you acquire most of the valuables, but I don’t think these are necessary. You may also buy pins using the in-game currency. These will either function as buffs or alter the look of certain powers, such as rainbow-colored PSI-attacks.

Motherlobe is enormous and serves as the main hub, although you are free to explore beyond it. You can also return to any of the minds you’ve visited as a Psychonaut. Outside the Motherlobe, there is a huge universe waiting for you to discover its mysteries. Aside from the main quest, Raz may complete extra tasks from key characters to earn prizes such as in-game currency or improve his rank.

There aren’t that many boss fights in Psychonauts 2, but the few that do happen are simply outstanding. They are expertly crafted and tuned so you are not just focused on mashing buttons to combat a foe, but also figure out them as part of a puzzle. One of the first bosses that you encounter in Psychonauts 2 is Lucktopus. This boss has captured your fellow interns and transformed them into cards. You have to figure out its weak points while avoiding any attacks that it lays on you. I not only enjoyed the design and structure of every boss fight, but I also appreciated how unique they felt.

With combat being a weak point in the game, it was refreshing to find that the fights aren’t just centered on combat with goons or a boss. They needed you to utilize your psychic abilities to exploit a boss’s vulnerability. Half the joy is figuring out how to accomplish it. At a later level of the game, I was needed to perform specific cooking duties before fighting a boss who could only be vanquished with food. While the arena was small and the fight itself was hectic, it was still a one-of-a-kind event that needed you to be active and on your toes. 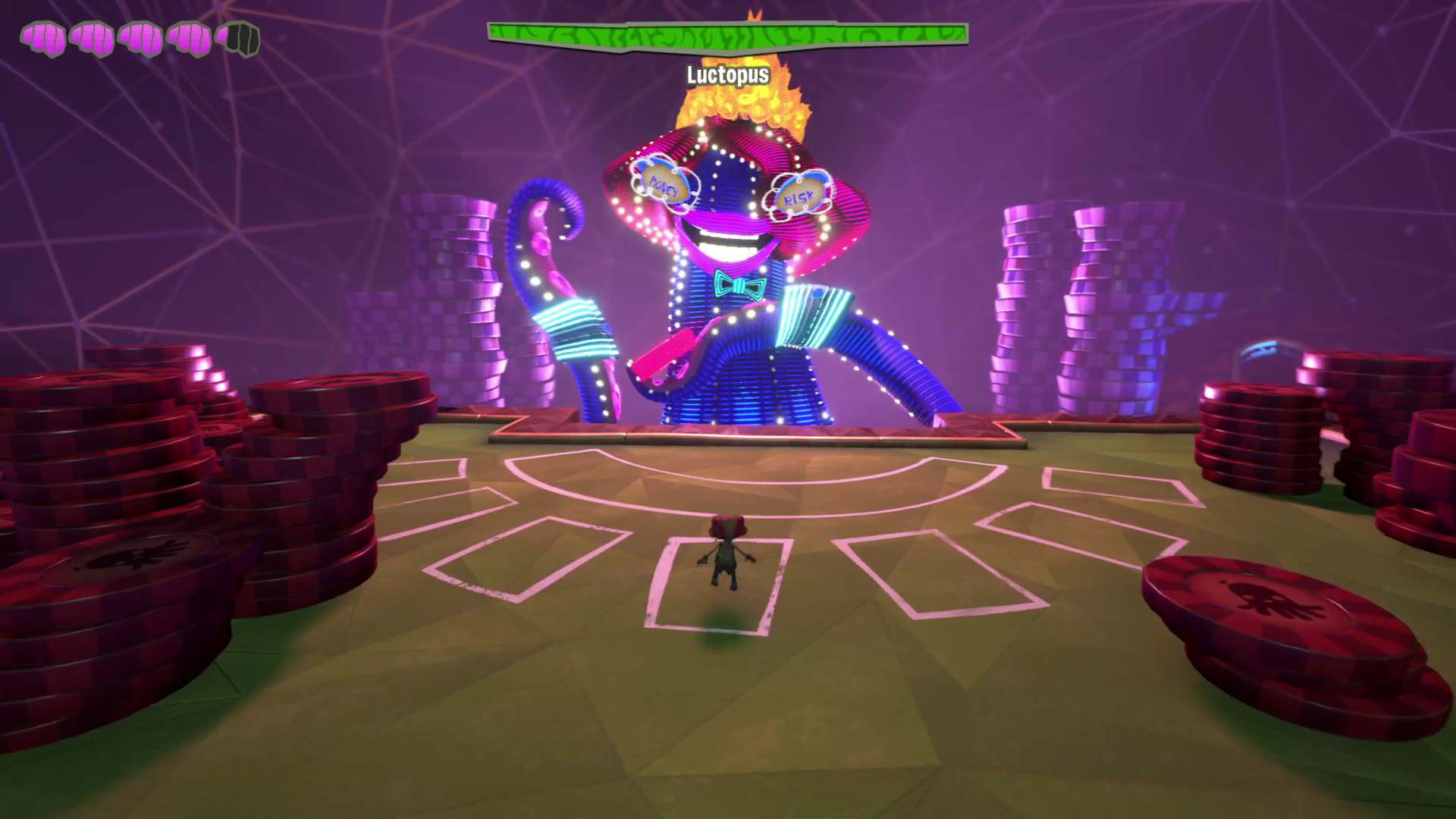 Psychonauts 2 is best played on the Xbox Series X in terms of resolution, HDR, and frame rate. Because I was playing the game on a PS4 Pro, I was limited to 1440p at 30 frames per second. I didn’t think the performance was all that awful. The frame rate was mostly fluid, except for a major fault with the game: stutters. These stutters might occur at any time while walking around the Motherlobe. They can also occur after cutscenes or when a new level is loaded. It’s pretty unpleasant to see them happen all the time, so if I were you, I’d only play Psychonauts 2 on a PC or current-generation consoles. The load times are also long, but luckily the game loads a huge open area at once, so you can basically play it without loading until you advance to the next open section.

Psychonauts 2 is, in my opinion, one of the finest games of 2021. It also feels like a dream game that was not constrained by budgetary restrictions. The presentation is excellent, with long cutscenes, and it is overall a well-polished game. I didn’t see any big issues during my playthrough, even on a PS4, which I don’t believe was the leading platform. The level design in the sequel outperforms everything in the original game, even the Milkman Conspiracy level.

Psychonauts 2 will be remembered as one of the best sequels. It's an amazing adventure game with a great presentation and well-designed levels.

Previous Article
Tales of Arise Demo Shows a Promising Action RPG With Charismatic Cast
Next Article
The Medium Is Not Coming To PS Plus In September, Confirms Bloober Team

Psychonauts 2: All Psychoseismometers Location For Gisu

Psychonauts 2: All Queepie Location In The Questionable Area