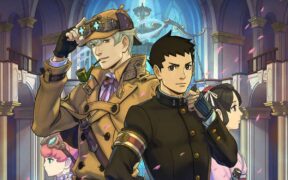 Gaming, News
The Great Ace Attorney Collection Rated In Taiwan For PC, Switch, and PS4 But Not Xbox One
Ali Haider February 13, 2021

The Great Ace Attorney Collection has been rated on PC, PS4, and Nintendo Switch in Taiwan but there is no sign of an Xbox One version. These games were based on the Phoenix Wright series and acted as a spin-off that was also a prequel. The first game was released exclusively in Japan for the […]