The PC launch of Uncharted: Legacy of Thieves collection failed to build momentum on Steam, as it debuted lowest among other Sony IPs released on the platform.

A comparison between the all-time player peak count for Sony IPs released on Steam, courtesy of Steamdb, shows some rather disappointing numbers for the debut of the Uncharted series on PC. The game had arrived on PC a couple of days ago, hitting an all-time player peak of around 8,000. It was expected to build some additional momentum during the weekend, but the earlier peak player count only managed to increase to a little under 11,000 players. 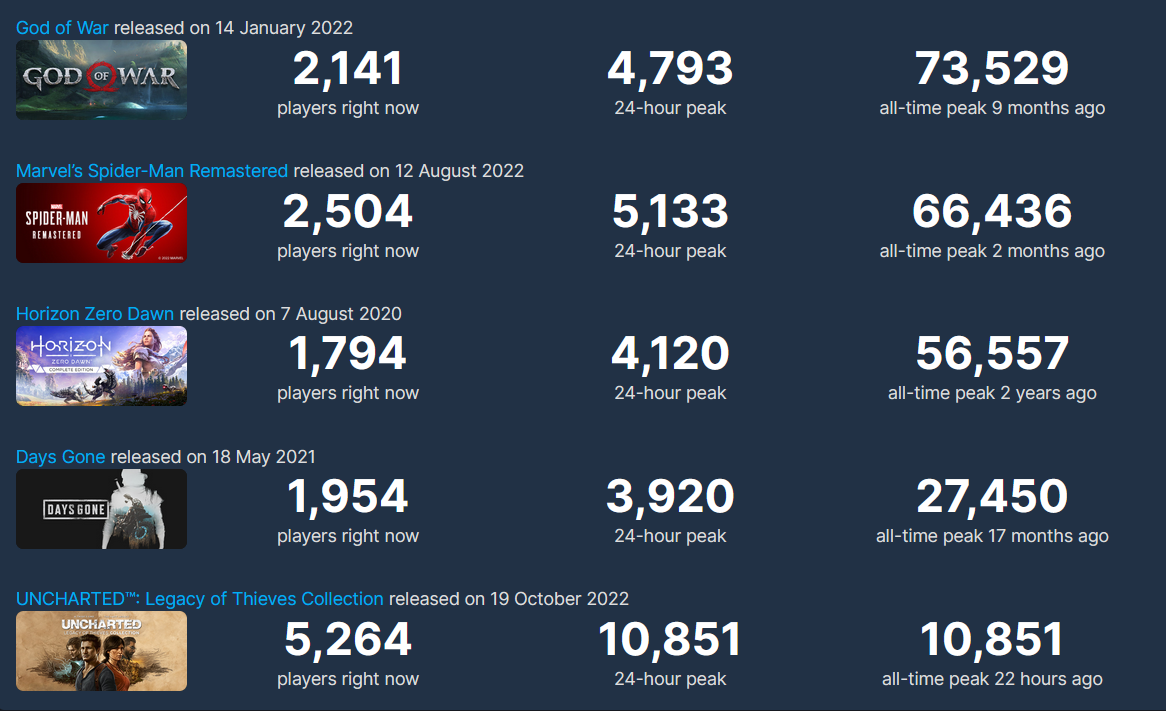 As seen from the comparison chart above, this is by far the weakest PlayStation release on PC to date. What comes as particularly surprising is that the critically acclaimed series even managed to fare much worse than Days Gone, which wasn’t received nearly as well.

Several reasons may have contributed Uncharted Legacy of Thieves collection not performing as well as the other Sony IPs. Firstly, the collection only comes with the fourth and fifth entries in the series. Those new to Uncharted may have wanted to start from the very beginning with Uncharted 1, 2, and 3, but the option to do so is not available on PC. Secondly, the game is priced at $50, and regional pricing is rather non-existent in most cases, which may be considered too steep a price for a game that was originally released back in the year 2016.

Uncharted: Legacy of Thieves is now available on PC, and those looking to get optimized performance on lower-to-mid end system specs can check out our recommended settings here.

Uncharted 4: A Thief’s End, the first game in the Legacy of Thieves collection, is a 2016 action-adventure game developed by Naughty Dog and published by Sony Computer Entertainment. Players take control of Nathan Drake, a former treasure hunter who was persuaded to come out of retirement by his supposedly dead brother Samuel. The game is set several years after the events of Uncharted 3: Drake’s Deception. Victor Sullivan, Nathan’s longtime partner, and they look for hints as to where Henry Avery’s long-lost treasure might be. In addition to solving puzzles and platforming, players fight enemies with weapons, melee combat, and stealth.

How To Upgrade Uncharted 4 and Lost Legacy On PS4 to Uncharted: Legacy of Thieves On PS5
Salal Awan December 7, 2021

How To Upgrade Uncharted 4 and Lost Legacy On PS4 to Uncharted: Legacy of Thieves On PS5