AMD is partnering up with Microsoft and 343 Industries to develop a special AMD 6900 XT Halo Infinite GPU to celebrate the launch of the game in December.

Microsoft and AMD are partnering up for this promotion to release a special edition graphics card to commemorate the release of the game. AMD claims that this is the fastest graphics card that they have developed so far.

In their announcement post on the Xbox blog, they mentioned the features and provided an overview of this special edition graphics card.

Inspired by his newest generation Mjolnir armor, this AMD Radeon RX 6900 XT graphics card offers a custom shroud design bearing several unmistakable features from the Master Chief himself. Including a reflective, iridium gold fan border, the iconic “117” Spartan callsign, as well as a Cortana-blue light to signify the AI slot on the back of the Master Chief’s helmet.

They are also going to give 1 month Xbox Game Pass subscription for PC to anyone who purchases select AMD Radeon and AMD Ryzen boxed products at participating retailers and e-tailers. 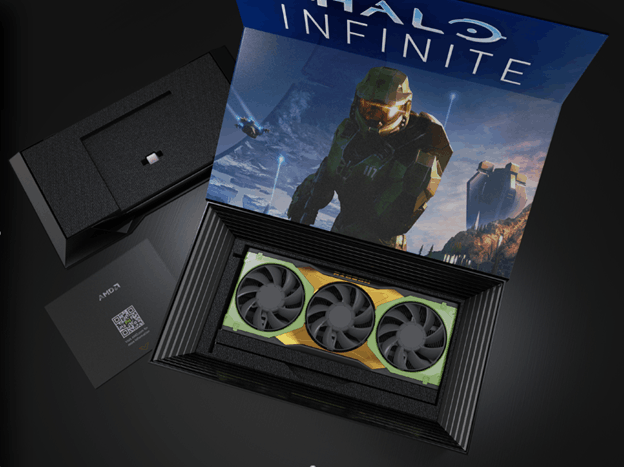 Check out a brand new PC overview video that provides a look at the PC version of the game. AMD is partnering with 343 Industries to bring ray-tracing to Halo Infinite.

Halo Infinite will be available on December 8, 2021. It will launch on the same day for Xbox Game Pass on PC and Xbox consoles.