Fall Guys could be heading to Xbox Game Pass as it was teased by an official social media account on Instagram. This is the second such tease for the game.

Fall Guys was one of the most successful games of 2020. It launched for PC and PS4 and quickly rose to become the best-seller on Steam. It was a success for the indie developer Mediatonic who is continuing to update the game, adding new content for it.

Update: Devolver Digital has confirmed that they have no plans to bring the game to Game Pass so this is a false alarm.

The game has been teased for Xbox Game Pass before, but this time, the response was direct when a fan questioned the Instagram account of Xbox Game Pass regarding the inclusion of Fall Guys.

As captured by a user on reddit, the account replied to one of the questions regarding the game coming to Game Pass revealing that it is releasing soon. 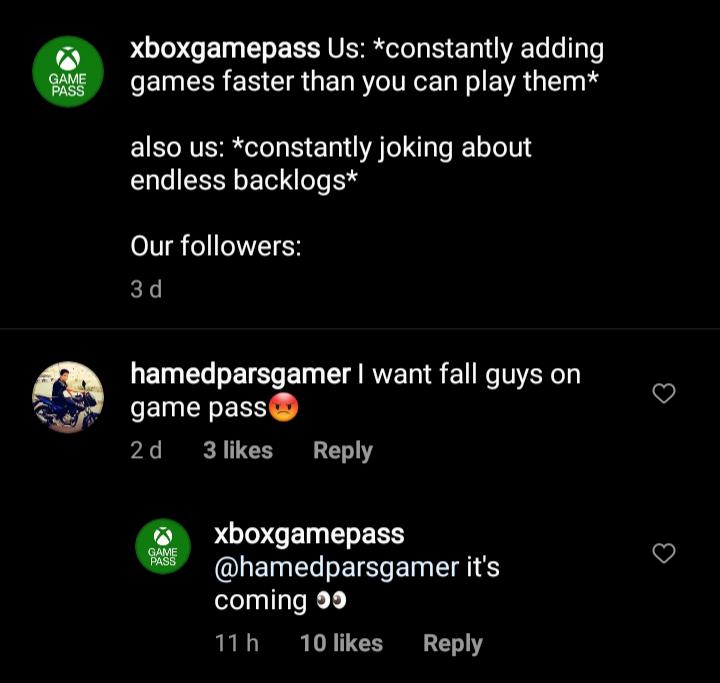 While Microsoft has just shared an update for the Game Pass lineup later this month, there is plenty to come in February and ahead. One of the games that are coming to the subscription service is Fall Guys while Yakuza 6 is also dropping in the coming days.

Microsoft has continued to add new games to their Game Pass lineup. Fall Guys will make its debut on Xbox One and Xbox Series at the same time as its Game Pass launch if we go by this comment that was posted to the social media account of Game Pass.

Sonic The Hedgehog Set To Be Featured In Fall Guys In A Big Way
Muhammad Ali Bari July 1, 2022