Square Enix has opened the official teaser site for Final Fantasy XVI also giving a detailed description of the characters and much more.

The official website has been updated with two new sections. One is for the characters while the second one is for the world. If you are interested to learn more about Final Fantasy XVI, there is a lot of new information on the website including the confirmation of an earlier artwork being from the world of Final Fantasy XVI.

Read More: Cyberpunk 2077 Is Aiming For 90+ Metacritic Score, CDPR Calls It The Main Reason For Delay

The firstborn son of the Archduke of Rosaria. Though all expected him to inherit the Phoenix’s flames and awaken as its Dominant, destiny instead chose his younger brother Joshua to bear this burden. In search of a role of his own, Clive dedicated himself to mastering the blade. His practice pays off when, at just fifteen years of age, he wins the ducal tournament and is dubbed the First Shield of Rosaria—tasked to guard the Phoenix and blessed with the ability to wield a part of his fire. Alas, Clive’s promising career is to end in tragedy at the hands of a mysterious dark Eikon, Ifrit, setting him on a dangerous road to revenge. 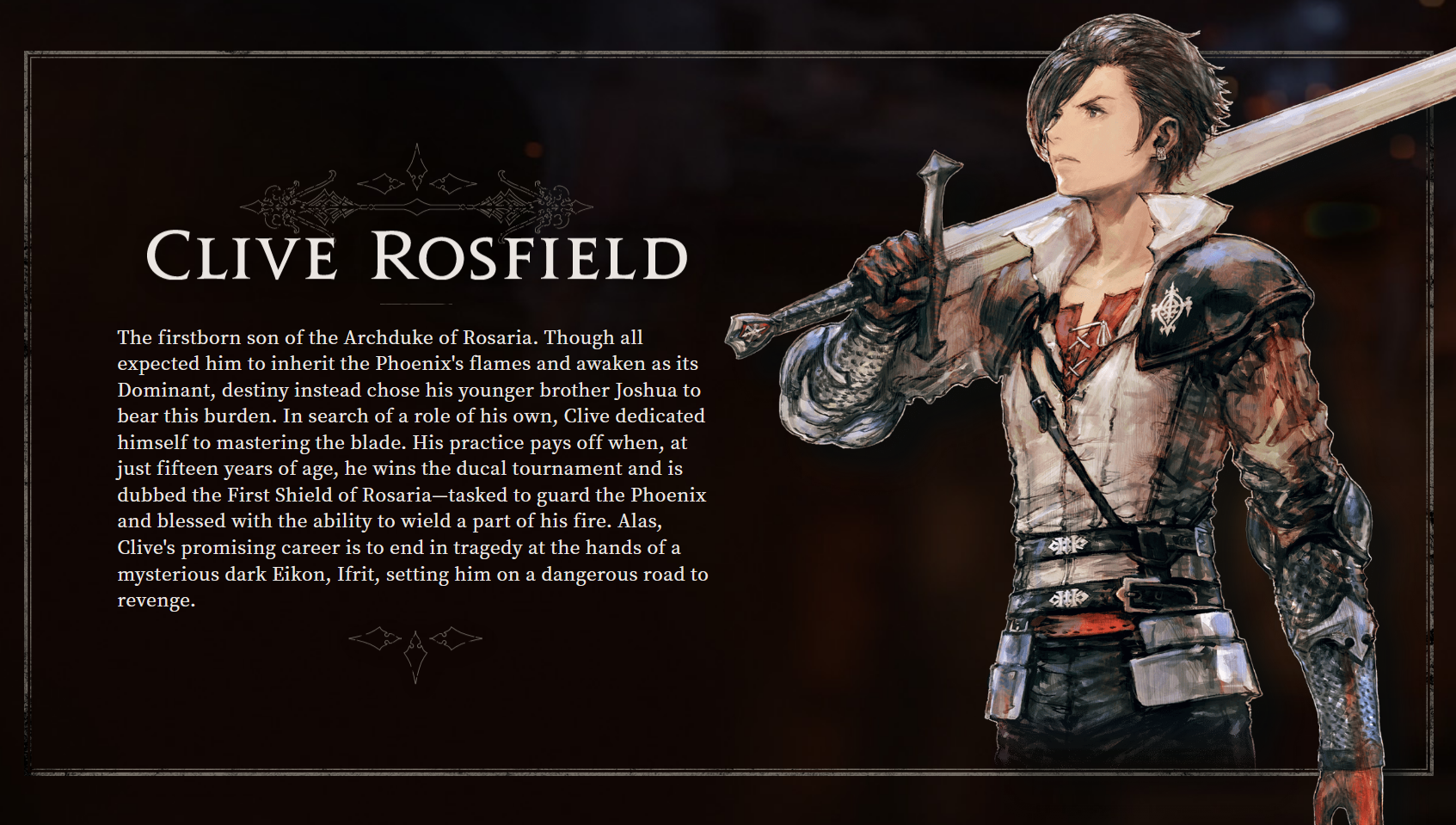 The second son of the Archduke of Rosaria and Clive’s younger brother by five years. Joshua awoke as the Dominant of the Phoenix soon after his birth. Despite his noble upbringing, Joshua treats all his father’s subjects with warmth and affection—none more so than Clive, whom he deeply admires. Joshua often laments that it was he, the frail and bookish younger son, who was granted command of the firebird’s flames, and not his stronger, braver brother. While Clive will gladly throw himself into any danger, Joshua quails at the sight of a carrot on his dinner plate. But carrots become the least of his concern when he, too, is swept up into the tragic events that change Clive’s life forever. 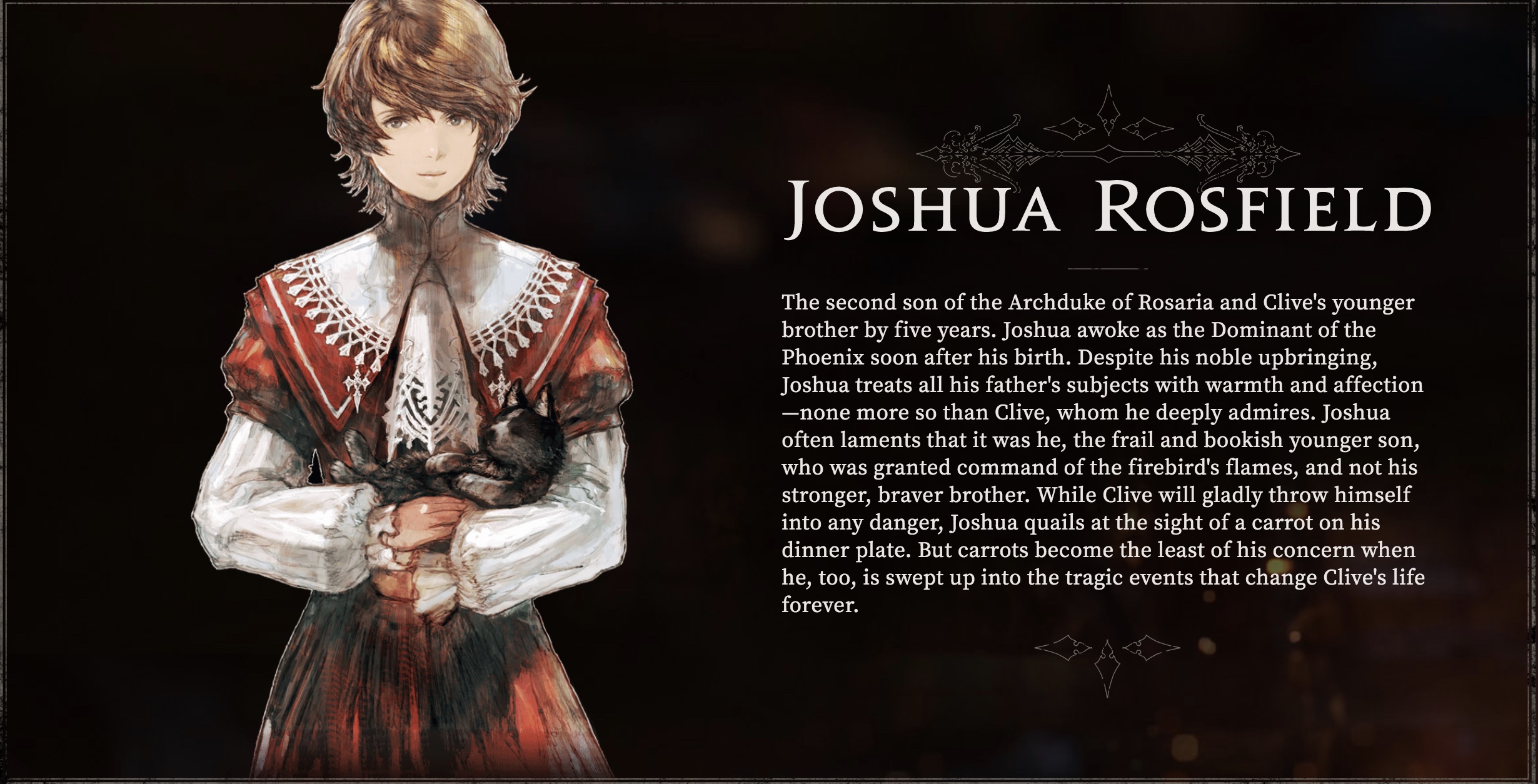 Born in the fallen Northern Territories, Jill was taken from her homeland at a tender age to become a ward of Rosaria, securing peace between the two warring nations. The Archduke insisted that she be raised alongside his sons, and now, at twelve years of age, she is as much a part of the Rosfield household as Clive and Joshua. Ever kind, gracious, and unassuming, Jill has become a trusted confidant to the brothers. 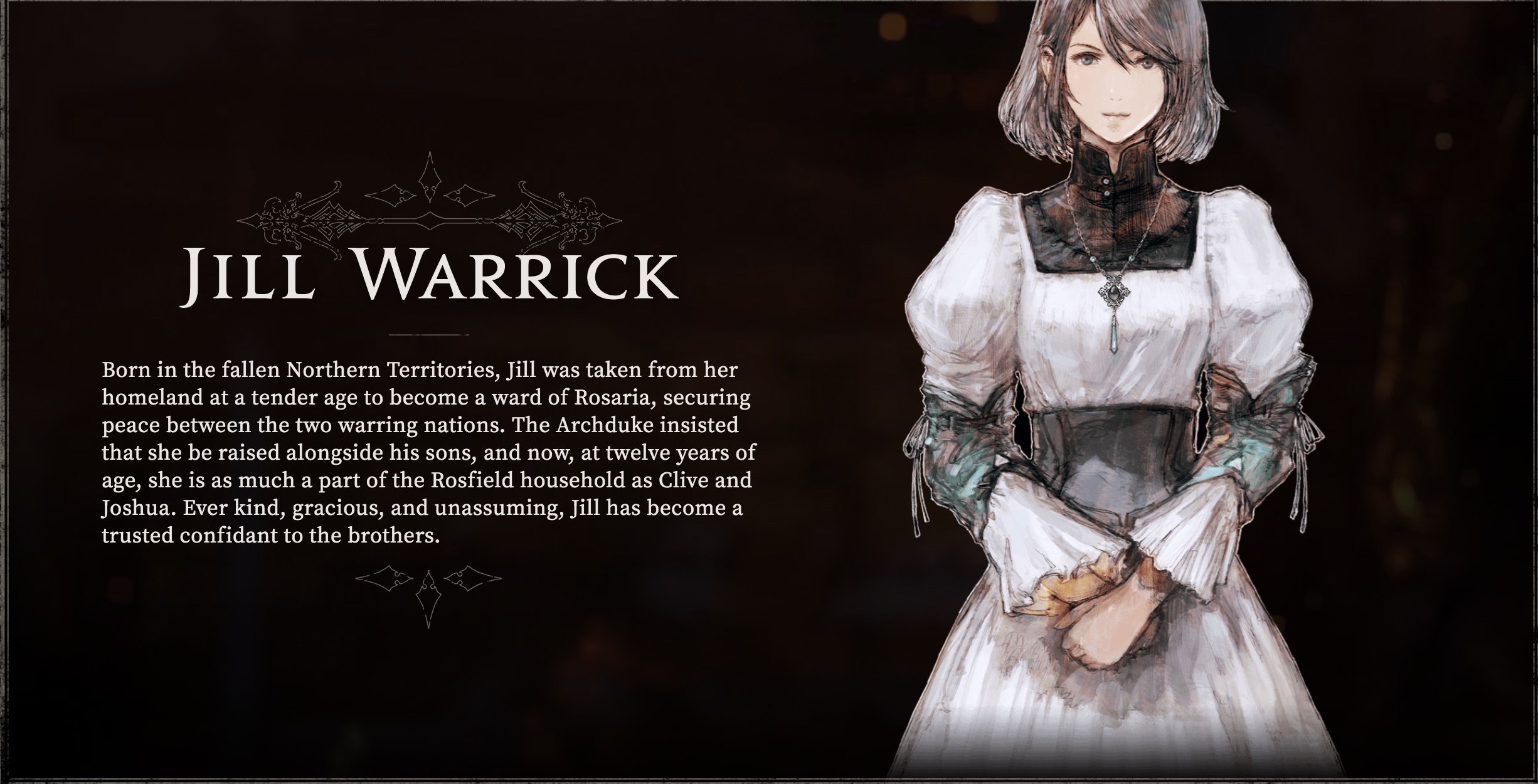 The official website has also shared a new artwork of the world featured in the game along with a description.

The land of Valisthea is blessed in the light of the Mothercrystals.

The land of Valisthea is studded with Mothercrystals—glittering mountains of crystal that tower over the realms around them, blessing them with aether. For generations, people have flocked to these beacons to take advantage of their blessing, using the aether to conjure magicks that let them live lives of comfort and plenty. Great powers have grown up around each Mothercrystal, and an uneasy peace has long reigned between them. Yet now the peace falters as the spread of the Blight threatens to destroy their dominions.

The Eikons are the most powerful and deadly creatures in Valisthea. Each resides within a Dominant—a single man or woman who is blessed with the ability to call upon their dread power. In some nations these Dominants are treated as royalty in admiration of this strength—in others they are bound in fear of it, and forced to serve as weapons of war. Those who are born as Dominants cannot escape their fate, however cruel it may be.

Final Fantasy XVI will be out exclusively for the PS5. More information on the game will be shared later in 2021.