Ember Lab is a new independent development studio with a history in animation rather than game production. Kena: Bridge of Spirits, their latest release, appeared to be very promising, but some doubters felt that because it was a new title from an independent studio with little expertise, it wouldn’t come out so good. Consider me surprised, given that Kena: Bridge of Spirits is a lovely adventure that evokes nostalgia while providing an emotionally resonant tale with interesting gameplay.

Kena: Bridge of Spirits is one of the most amazing technical showcases on the PS5, with jaw-dropping animation and gorgeous graphics. However, despite the technological achievement, it lacks many of the niceties required in a modern game. If I’m being honest, this is a positive thing since it gives the game a certain charm that is difficult to find these days. It’s comparable to Crash Bandicoot 4. While the developers opted to invest in new features, the majority of the old gameplay design principles were retained in Kena: Bridge of Spirits.

Kena is a youthful spirit guide who connects the physical world with spiritual beings and assists lost souls who journey into the spirit realm. Rot, a collection of adorable fuzzy animals, assists her. Kena can call Rot to do different tasks. Kena’s abilities may be put to use not just in navigating the environment, but also in battle. Combat, exploration, and riddles are all part of the gameplay. It is not an open-world framework, but there are several open areas and a central hub. The majority of the game is linear, with some backtracking, however, you may quickly fast travel to a prior place by acquiring warp spots scattered around the world map.

When I stated how the game has an old-school feel to it, I was referring to the progression. At first, you’re attempting to go to different places while learning the ins and outs of the mechanics. This is completely linear until you reach a point where you need to go back and locate items that will assist you to continue. The game is based principally on the design of classic action platformers. The world is full of mysteries and collectibles. Your objective is mostly to discover new areas, locate certain objects, and so forth. While doing all of this, you will also learn what happened to this world and why it was destroyed. The bulk of it is shown in flashbacks.

I’m not going to label Kena: Bridge of Spirits a Metroidvania game since it isn’t. It’s a strictly linear game that feels more like Zelda than Castlevania. The action-based combat is smooth and simple to understand. Kena may use her spirit shield to deflect or parry attacks. She may also summon Rot to bound enemies or utilize it to hurt them, however, you won’t have these moves right away. You must earn upgrade points to unlock these and other skills to improve Kena’s arsenal.

In the game, there are dozens of Rot to gather, and not all of them will come on your path. Obtaining a certain quantity of Rot improves Kena’s ability to summon them and unlocks new abilities. To find these Rot, you must first listen to the DualSense controller’s vibrations and then use your mask to detect their hidden position, which is usually glowing. Consider Rot to be one of the cutest animals you’ve ever seen in a video game. I believe the designers are fans of My Neighbor Totoro. They resemble Totoro and the enigmatic shadowy creatures from Studio Ghibli’s popular film.

Initially, I was not a fan of Haptic feedback. Over time, I grew to like them. They are used for certain tasks such as performing the stronger strike or charging your bow. With the controller’s feedback, you can fully feel the tension in the action. Fights in the game are more enjoyable as a result of it, but is this a game-changing feature? It’s not exactly one, but having it on PS5 is a great bonus. You won’t miss out on much if you don’t have it. 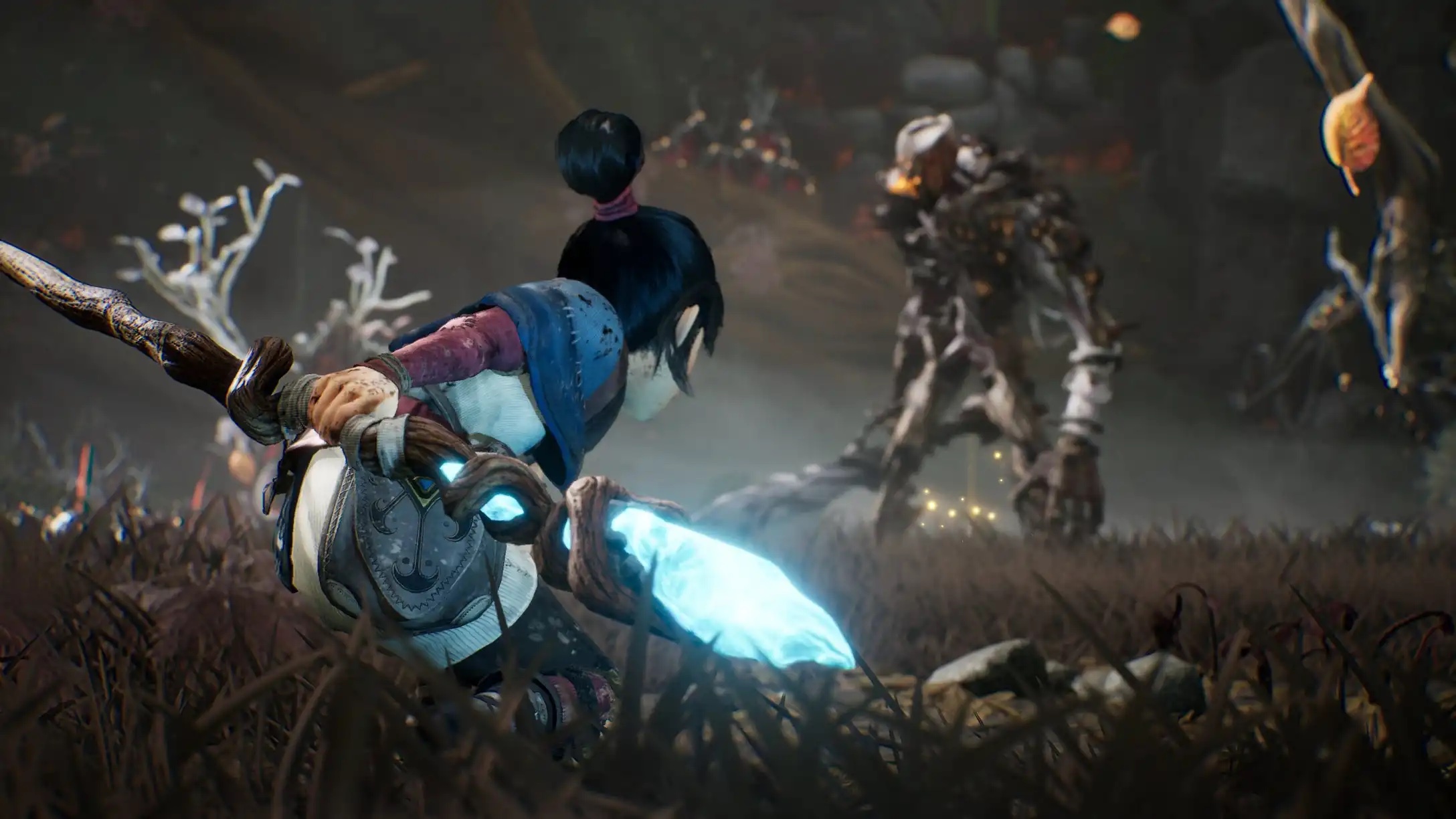 The game has a wonderful start, but once you start backtracking, its faults become more obvious. Regardless, it’s difficult to deny that Kena: Bridge of Spirits is an emotionally charged trip with a personal touch. Even if the gameplay becomes sluggish, you must see it through to the end since the plot gradually builds up events that lead to a final payout. It is by no means a long journey, which is a plus in my book. The pricing is also reasonable for a game of this length, so you get your money’s worth.

Technically, I’m overjoyed to be able to play it on the PS5. The load times are a couple of seconds, and the game runs at 60 frames per second. You can stay to 4K @ 30 FPS option, but I don’t think the input lag is worth the higher quality. One quibble I had was that the game occasionally employs pre-rendered cutscenes that run at a lower frame rate, resulting in a bizarre mismatch of 60 FPS and sub-30 FPS experience.

Kena: Bridge of Spirits is a relaxing game with fantastic visual direction and fluid gameplay. It is a remnant of the past with modern touches in many ways.

Kena: Bridge of Spirits PC vs. PS5 vs. PS4 Comparison: Which Platform Is The Best?
Salal Awan September 21, 2021

Kena: Bridge of Spirits PC vs. PS5 vs. PS4 Comparison: Which Platform Is The Best?