Overwatch 2 will be available on October 4th, and if you’re wondering how the game’s battle pass and progression are handled, read ahead.

Given that Overwatch 2 is moving to a free-to-play model, fans understandably have many questions about how the live service component, including the battle pass, will work. 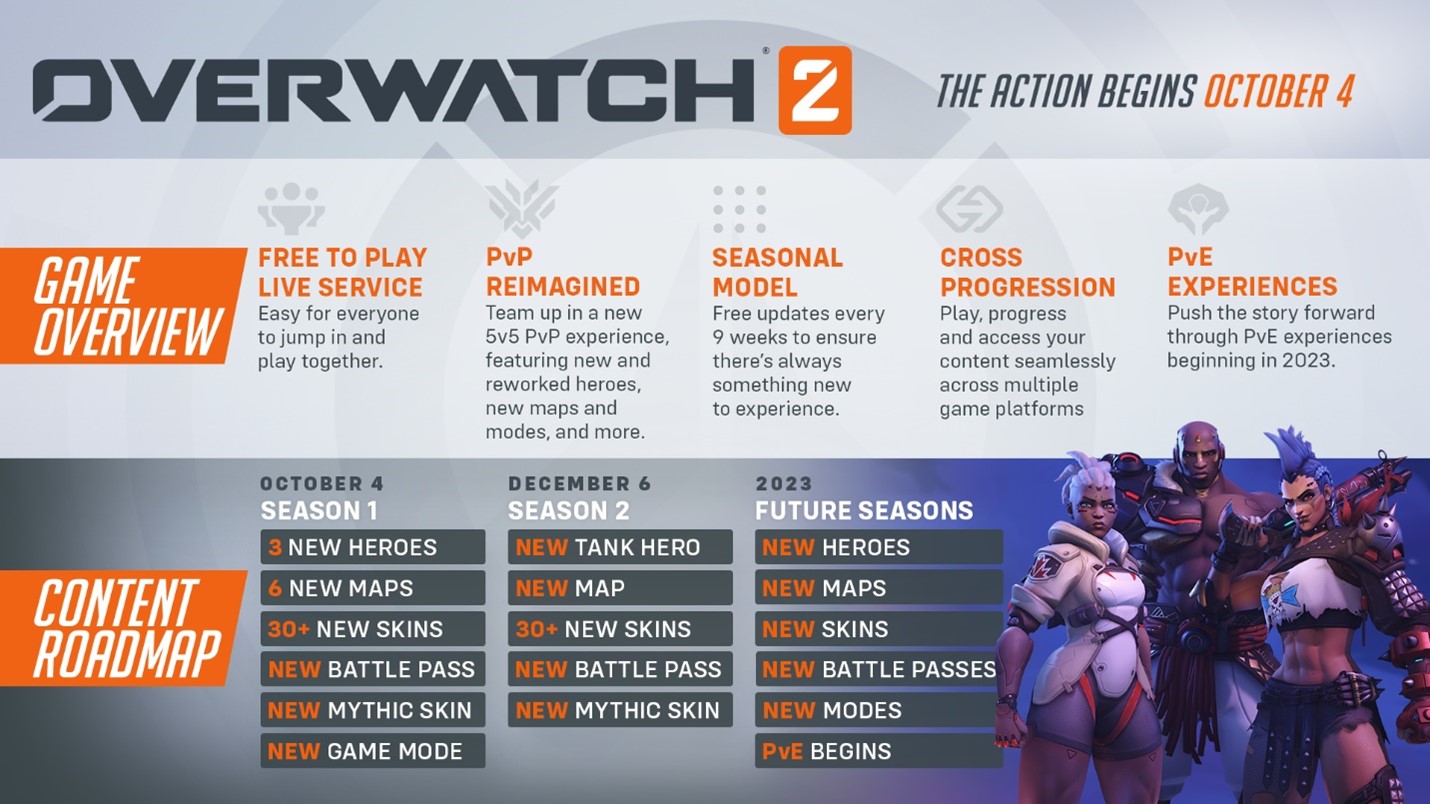 Overwatch 2 is shifting to a seasonal model where Blizzard plan to deliver new content to the game every nine weeks. There will be a lot to discover in each season, including fresh experiences and ways to play. Typically, each season will bring either a fresh hero or a fresh map. A new Battle Pass will be released for each season, each with a different theme and up to 80+ unlockable tiers of cosmetics. To ensure that everything always feels new and distinct, the studio also intends to make a majority of the hero balance changes at the beginning of each season.

With this new seasonal model, loot boxes will no longer be available in Overwatch 2. Instead, you can use the new virtual currency, Overwatch Coins, to buy exactly what you want from the new in-game shop. Every week, all players will have access to the shop’s featured cosmetic items; in Season One, many of these cosmetics will have a cyberpunk theme. Different themes will be used for cosmetics in upcoming seasons.

The Season One Battle Pass will include the following free rewards that can be unlocked in 20 tiers across the more than 80 total tiers:

Meanwhile, Season One’s Premium Battle Pass includes, in addition to all the free rewards above, the following unlockable rewards:

By playing the game and completing daily and weekly challenges that offer significant XP, everyone advances through the Battle Pass. Grouping up for a 20% match XP boost is another way to advance through your Battle Passes more quickly. All previously earned premium tiers will become unlocked at the time you decide to purchase the Premium Battle Pass later on in the season.

You can advance through the Prestige tiers if you finish the season’s Battle Pass. Although prestige rewards take longer to obtain, they come with a total of 8 different unique hero titles that can be equipped on your name cards during Season One. Specific Prestige tier titles can only be obtained during the season in which they are offered; for instance, Season One titles cannot be obtained during Season Two.

How To Unlock New Heroes In Overwatch 2

Overwatch 2’s roster will grow to 35 heroes with its release, as Sojourn, Junker Queen, and Kiriko join the fray. Blizzard has changed its hero design approach to let players influence their matches with a variety of different heroes and strategies as the studio builds new heroes and balances the existing cast for the new 5v5 PvP experience. This entails lessening the availability of certain hard counters to heroes.

Except for Seasons One and Two, which will each have a new hero, new heroes will usually debut every other season. After that, Seasons Four and Six will each feature a new hero.

All players, including those who begin playing in future seasons and those who did not level up their previous Battle Passes to the required level to unlock a hero, will have the chance to acquire the heroes introduced in earlier seasons simply by playing. Heroes from previous seasons will be available for players to earn through unique new challenges. Alternatively, they can be bought directly from the store with Overwatch Coins.

Overwatch 2 LC-208 Error Fix In The Works, Coming Out Soon