Tactics Ogre: Reborn is a remastered version of a classic SRPG created by Final Fantasy series veteran Yasumi Matsuno. While it lacks the appeal of the Final Fantasy series, it features an in-depth combat system with some amazing storyline and character development. The original Tactics Ogre was published for the PlayStation 1, followed by a complete remake for the PSP in 2011. The battle mechanics were revamped, English and Japanese voice acting was added, and the soundtrack was remastered.

Tactics Ogre: Reborn expands on the foundation of the PSP Remake, bringing this classic to modern platforms with significant quality-of-life improvements. While the graphics are mainly the same, except for filters to smooth out the appearance of the sprite-based art style, the progression system’s fundamentals have changed. The class-based leveling system has been replaced by a more streamlined unit-based leveling system in the game. Each party member may now receive experience points independently, allowing for much more customization. 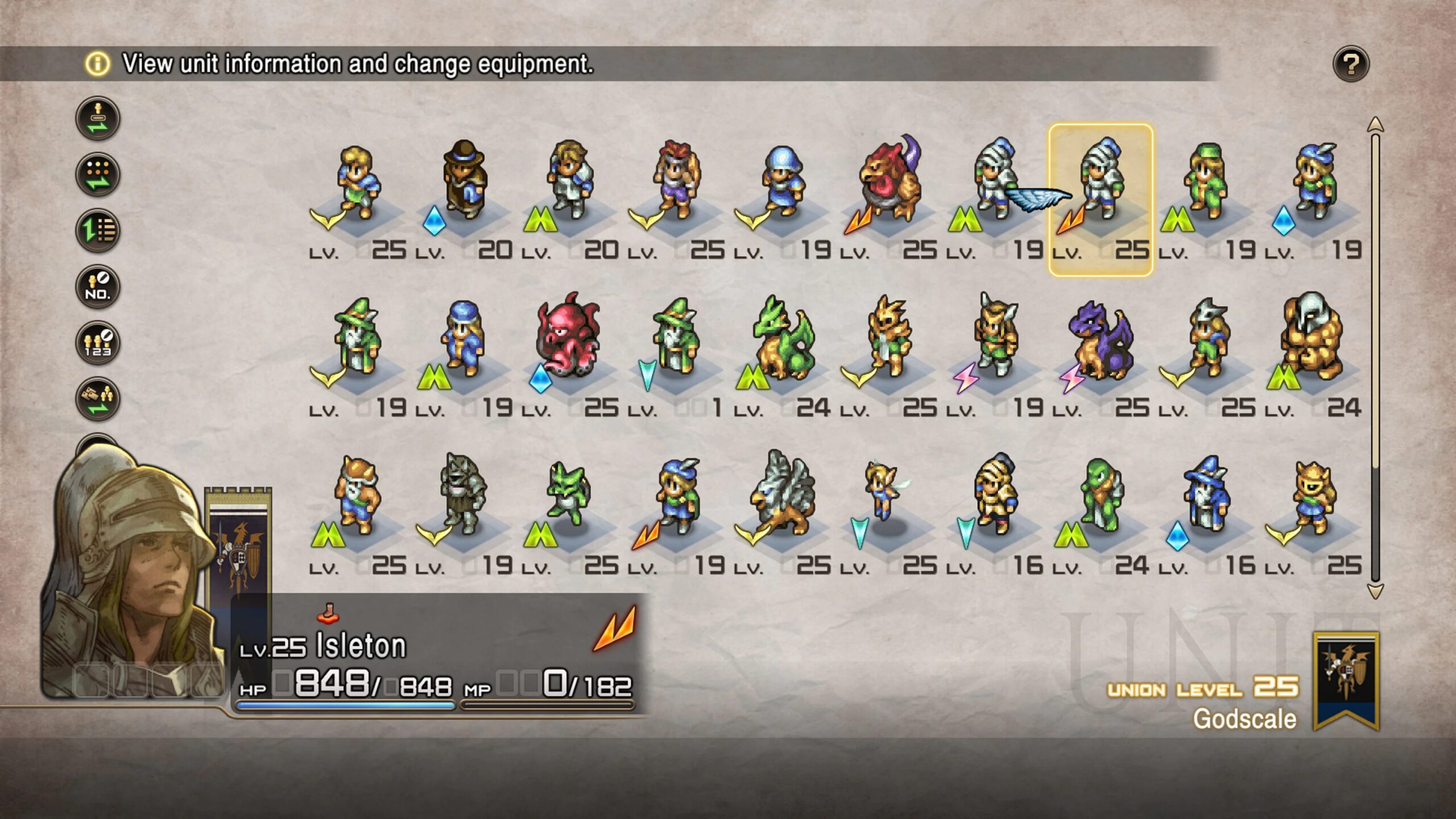 A permadeath mechanic was one of the most irritating parts of the original release. This has since been adjusted with a cooldown timer, making it feasible to avoid it. The gameplay has been greatly improved, including the addition of training battles. These are easily accessible on the world map, and because there is no chance of permadeath, they are significantly more enjoyable and can assist minimize the grind associated with random battles. The game also allows you to accelerate battles, which increases the pace of combat.

The new QoL adjustments have made the game much more acceptable, not only for newcomers but also for fans who have been away from the franchise for a long time. Not all of the new features, though, are fantastic. Some gameplay modifications, such as the adoption of a new card-based system on the battle map that may provide boost and debuff, can make battles seem much more intricate and chaotic. It is a two-edged sword in that it may occasionally work and increase the flow of the battle, but it can also wind up seeming like a needless distraction. This never seemed to increase the strategic depth of the combat. 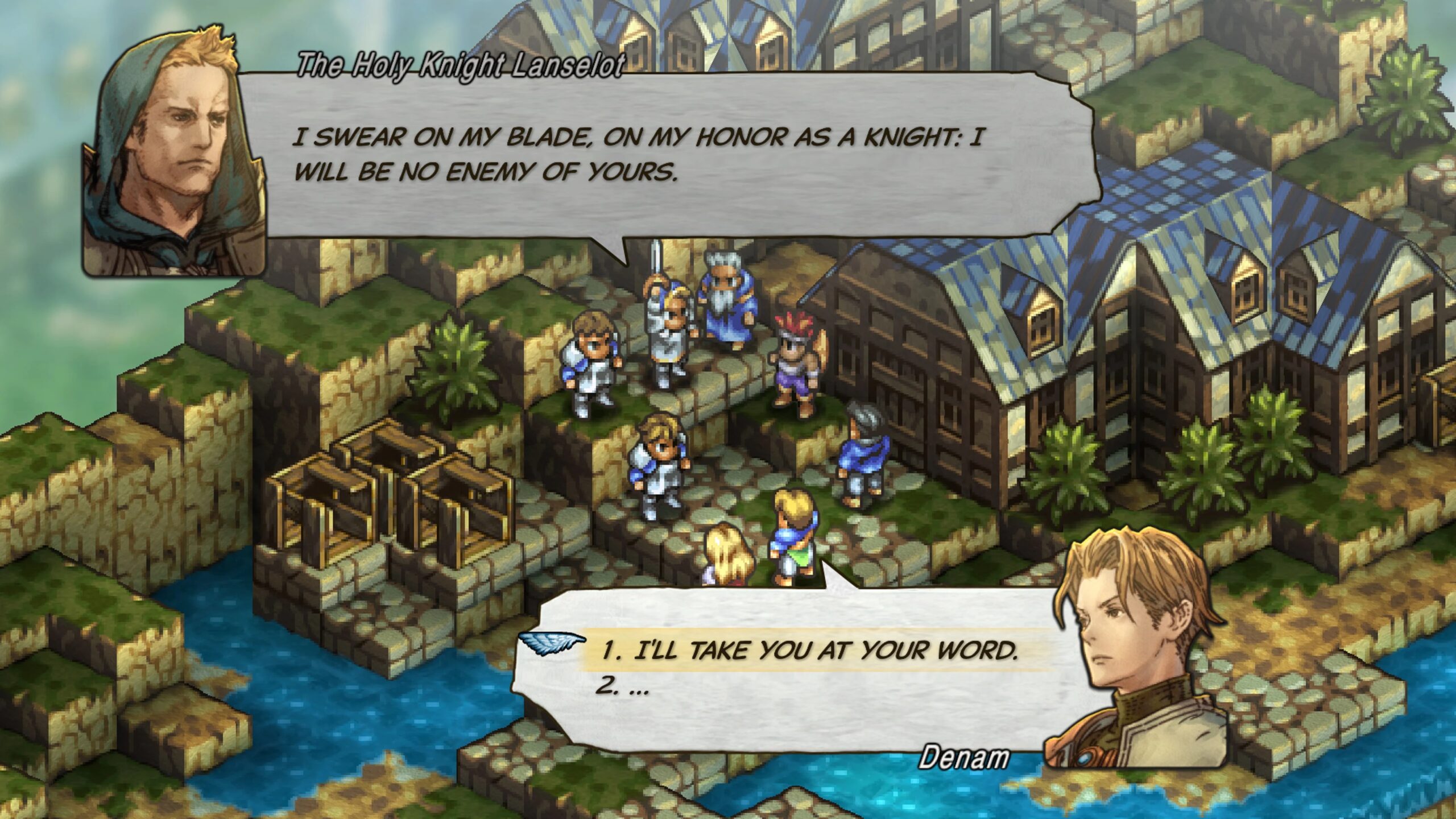 Tactics Ogre: Reborn features a terrific localization, which is aided by strong character development and storytelling. The game begins with some choices in the form of numerous tarot cards, which decide the main character’s attributes. The story follows Denam and his sister Catiua as they join a rebel movement with their buddy Vyce in a war-torn world. There is no linear path in the game since there are numerous endings. Each decision in the game might result in a different outcome. The branching narrative provides different character interactions and endings, increasing replay value. 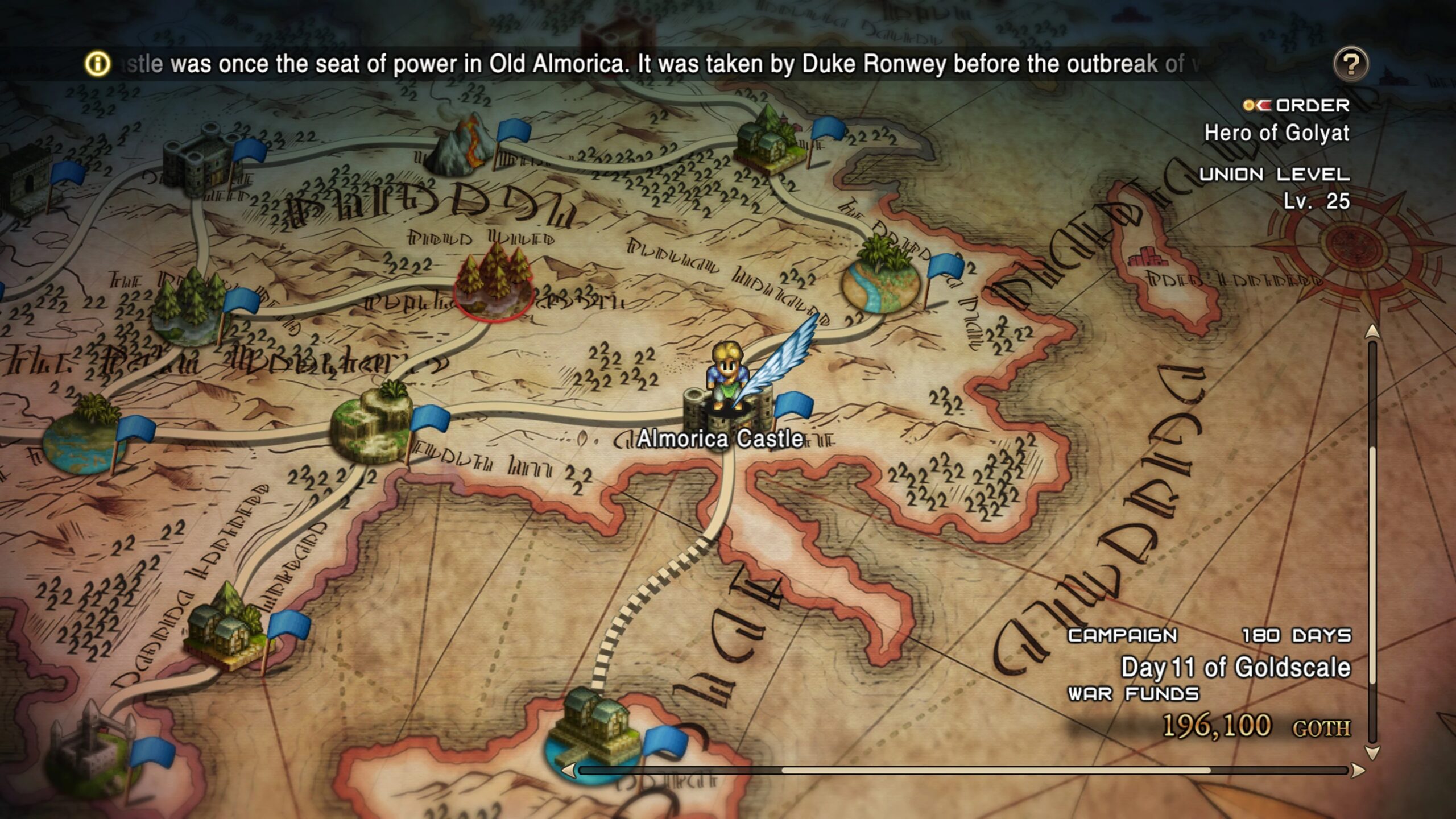 It’s a bleak narrative with some horrific moments. As the conversation may continue even during combat, there is a lot of dialogue to sit through. The game cleverly uses its political perspective to provide moral options and challenges the player to make difficult decisions. These choices will affect the destiny of key characters as well as who joins the main party. Fortunately, the World Tarot method allows you to go back to a previous decision. It can influence the result of a branching story path, but you must first complete the game. 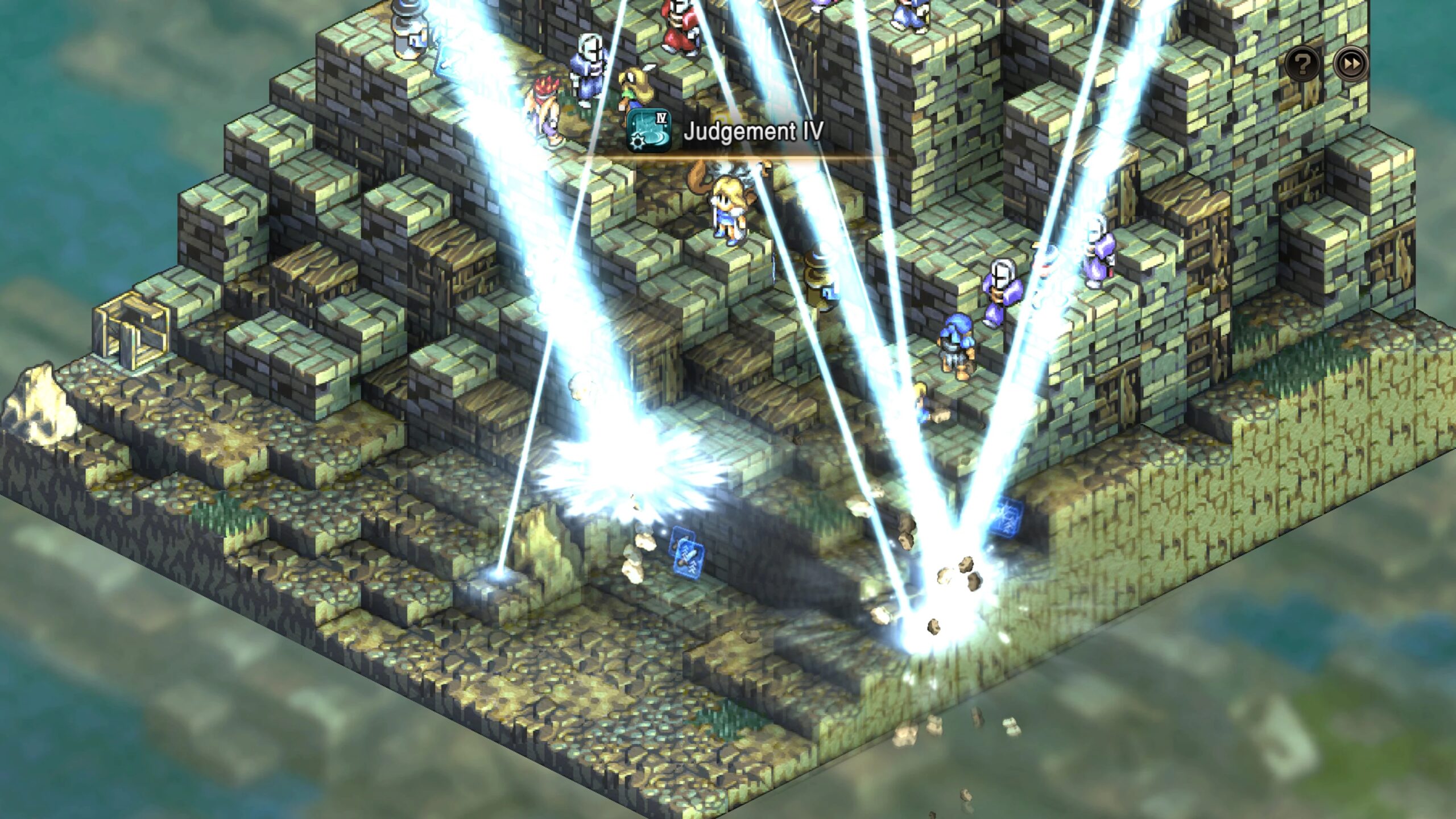 Tactics Ogre: Reborn is quite welcoming to newcomers. If you’ve never played an SRPG before, it may appear intimidating at first, but there are lots of tutorials in the beginning to teach you the basics of combat and the battle map. The grid-based layout of the game allows the user to deploy a restricted number of armed troops. Consider it a chess board on which you make your moves with your chess pieces. These can have many classes or abilities, such as warrior, cleric, knight, or warlock. The majority of the unique classes are not available at first but are progressively made available as the story unfolds.

The combat is turn-based, and you can advance along with the enemy, with the turn order governed by specific factors. There are regular attacks as well as special attacks that are impacted by a variety of variables, and figuring it all out is the key to success in the game. Because there are so many characters to recruit in the game, assembling a well-balanced army is the objective of reaching the ending, and battle tactics may also influence the outcome. Is it preferable to go on the offensive and target the enemy, or to stand back and attack them with archers or wizards? Before a battle, it is now possible to inspect the map and then develop a plan to defeat the enemy team. 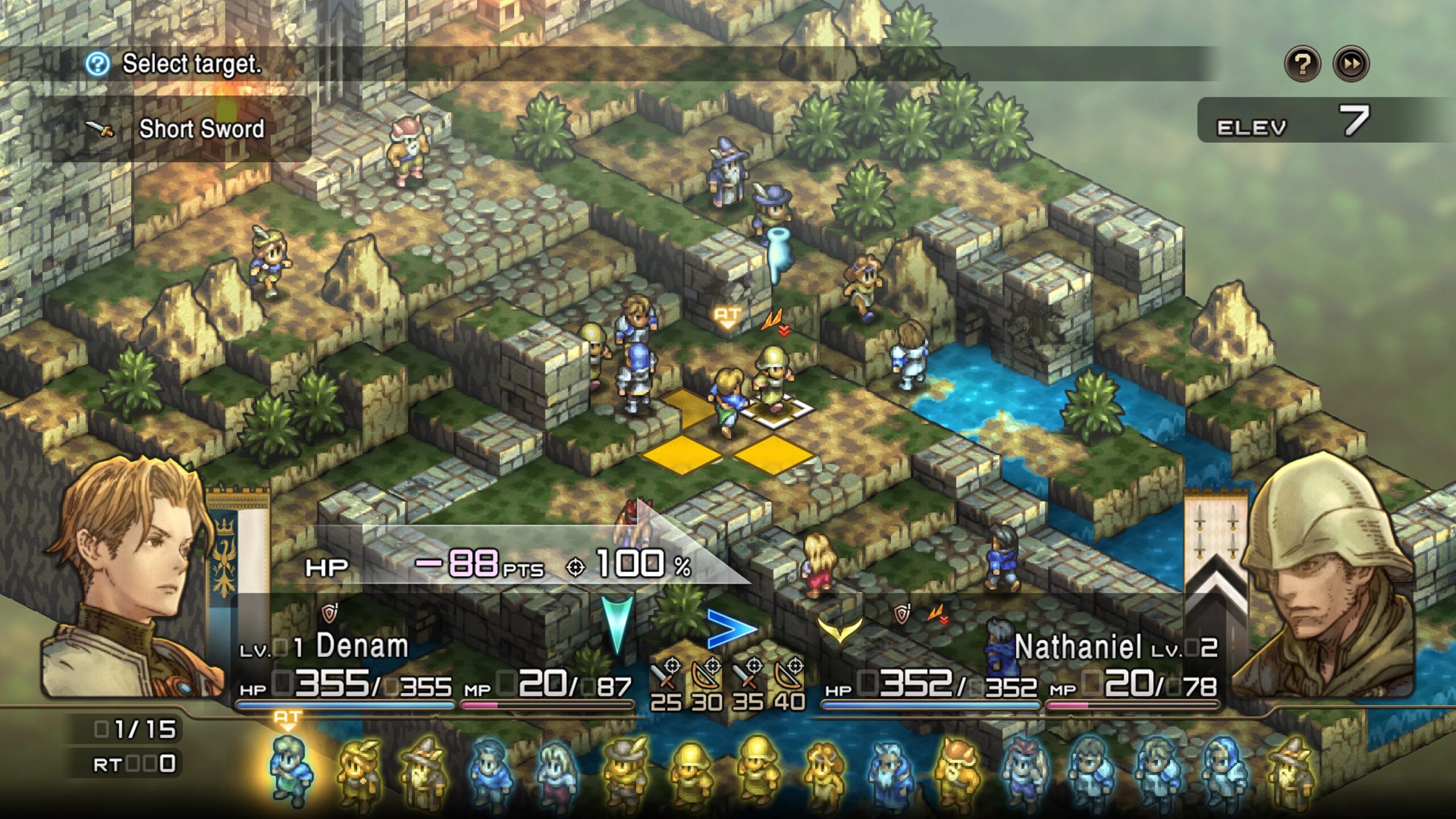 There have been some concerns about the visuals, but I didn’t mind the upscaled sprites. The UI and character portraits look excellent and appear to be entirely remastered in HD, and while the character sprites stick out, they are by no means a deal breaker. I would have liked to see a complete redesign of the sprites, but with so many playable characters in the game, it would have taken a long time. In any case, I don’t see any big flaws with the graphics here, and the gameplay improvements are more than enough for me to continue with this release and label it the definitive version.

In the current market, there is nothing quite like Tactics Ogre: Reborn, and this new release appears to check all the right boxes to bring this classic to modern platforms. It is a once-in-a-generation game that should be played even if you are not a fan of the SRPG genre.

Previous Article
GOW Ragnarok Studio Has Multiple Projects In Pipeline, New IP From Cory Barlog In Dev For Years
Next Article
Call Of Duty Warzone 2.0 PS4 vs PS5 vs Xbox Series Comparison: Which Platform Is Best