Sega and Platinum Games’ third entry in its stylish character action game series, Bayonetta 3, has been rated by both the ESRB and PEGI. The witch is set to make her return sometime in 2022.

Given that Bayonetta 3 has now been rated, it’s likely that its release date will be announced soon, possibly via a Nintendo Direct event. The game has received a Mature rating via the ESRB, with the rating guide stating that it includes violence, blood and gore, partial nudity, strong language, as well as in-game purchases. 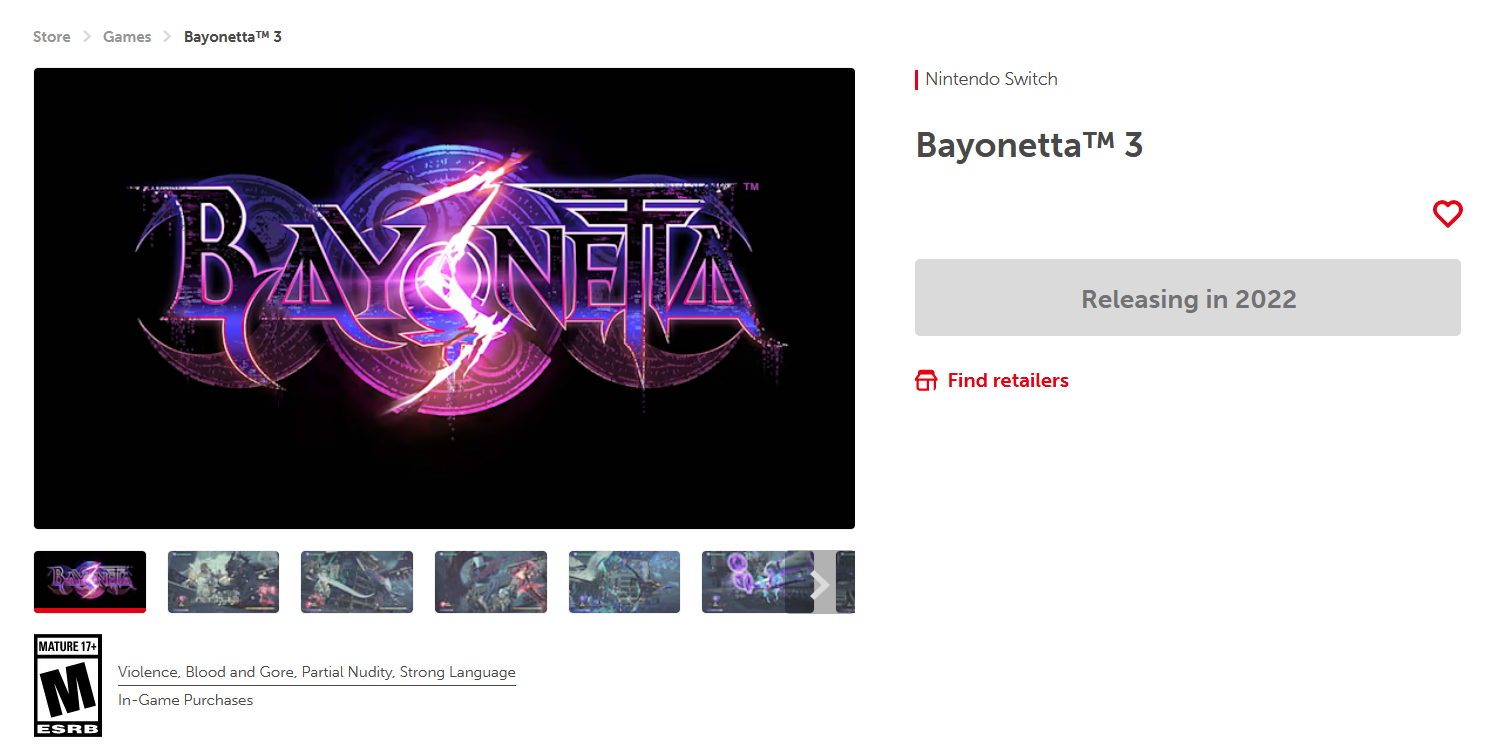 The rating guide doesn’t indicate anything out of the ordinary for a Bayonetta game. The series is known for its over-the-top and violent action, partial nudity, and use of strong language. Much like its predecessors, Bayonetta 3 features in-game currencies known as Halos and Orbs, which can be obtained by defeating enemies and be used to purchase new items and tools.

Previously, Bayonetta 3 was listed in the lineup of Nintendo Switch releases for the remainder of 2022 in Japan, alongside other prominent releases such as Mario + Rabbids 2. Seeing as the game has been rated, it appears to be on track for a global release sometime during Fall 2022.

For the uninitiated, Bayonetta 3 is a Nintendo Switch action and hack and slash game developed by PlatinumGames and published by Nintendo. It is the third game in the Bayonetta series and the sequel to Bayonetta 2. Reggie Fils-Aimé, Nintendo of America’s now-former president and COO, teased the game during The Game Awards 2017 with a teaser. The teaser featured an action sequence between Bayonetta and an undisclosed foe, with the color purple prominently featured throughout.

The announcement was accompanied by the release of Bayonetta and Bayonetta 2 ports for the Nintendo Switch. Yoshiaki Koizumi revealed that the third game’s development was proceeding well during a Nintendo Direct broadcast on February 13, 2019, despite the fact that they had yet to reveal anything at the time. On September 23, 2021, the first ever gameplay footage was revealed during a Nintendo Direct, and a release window of 2022 was confirmed.

Tags:
Previous Article
Elden Ring Barbarians Of The Badlands, Tekken 8 Among Games Allegedly Leaked Via Bandai Namco Hack
Next Article
Location Of New Assassin’s Creed Game May Have Been Revealed

Kirby and The Forgotten Land and Bayonetta 3 Listed For 2022 Release
Salal Awan September 23, 2021