Gotham Knights is an upcoming open-world game with four-player co-op support from Warner Bros. Montreal. It has been confirmed to run at 4K and 30 FPS on consoles.

After the news of the game supporting 30 FPS was confirmed by Warner Bros. Montreal, it led to some fans sharing their frustration over the lack of a performance mode. Lee Devonald, who is the Senior Technical Artist at Rocksteady, took it to Twitter to explain why they might have to limit the game to 30 FPS in a series of tweets.

I wish gamers understood what 60fps means, in terms of all of the things they *lose* to make the game run that fast. Especially taking into account that we have a current gen console that’s not much better than a last gen one.

You want dynamic time of day? What about global illumination? That’s usually 4 or more milliseconds right off the bat… A quarter of your frame budget is gone, just on one feature. Shadows? That’s usually another ms or two, depending how many lights you allow shadows on.

Like… Before you even get to “gameplay features” like enemy numbers and such, your frame budget is already being eaten into. And I wish gamers understood that things like lighting and illumination *are* gameplay features. It all adds up.

Replying to a user, Lee mentions how the limitations of the Series S will hamper an entire generation of games. Xbox Series S is the best-selling SKU for Microsoft ahead of the Series X so it is not surprising that Lee points it out in his tweet. He lists the weaker GPU as one of the reasons for it. The Series S GPU provides roughly 4 TFLOPs while the Series X GPU provides more than 10 TFLOPs, so there is obviously a big difference here. 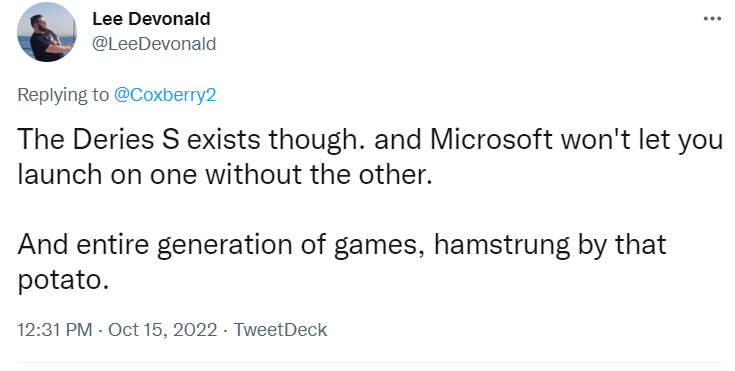 Most of the current-generation games have supported 60 FPS but in the case of Gotham Knights, the focus on a four-player co-op might be a reason why there is no choice available for players. Since the game will work across Xbox Series S and X, it could mean the developer couldn’t just toggle 60 FPS support on Series X while leaving the Series S with a lower frame rate.

Interestingly, the game doesn’t appear to require a beefy rig to run on PC, at least based on the system requirements shared on Steam.

That should be enough to run the game at 1080p and 60 FPS, which could be a potential target for the PS5 and Xbox Series X or even Series S.

Gotham Knights will be out on October 21, 2022. The game will be available for preload before launch if you have pre-ordered a digital copy of the game. The PSN trophies of Gotham Knights have also been leaked ahead of the official launch.