Granblue Fantasy: Versus Review – Stylish Fighting with a Dose of RPG

Granblue Fantasy is a popular mobile game that has continued to gain traction since launching back in 2014. It has become something of a juggernaut when it comes to mobile games so when the game developer Cygames decided to transition into console games, it was met with praise from fans. They initially announced different projects including a spin-off fighting game and an action RPG, and one of these is finally out now.

Granblue Fantasy: Versus is a fighting game developed by acclaimed Japanse game developer, Arc System Works. Fans might know them from the Guilty Gear series but they have worked as third-party developers on several licensed games including Dragon Ball Z and Persona. They have the technology to not only offer gorgeous animated visuals but also a perfectly woven fighting game that is designed around the limitations of the IP. Their work on Granblue Fantasy: Versus deserves praise because of how they have they have managed to combine RPG with the mechanics of a fighting game. 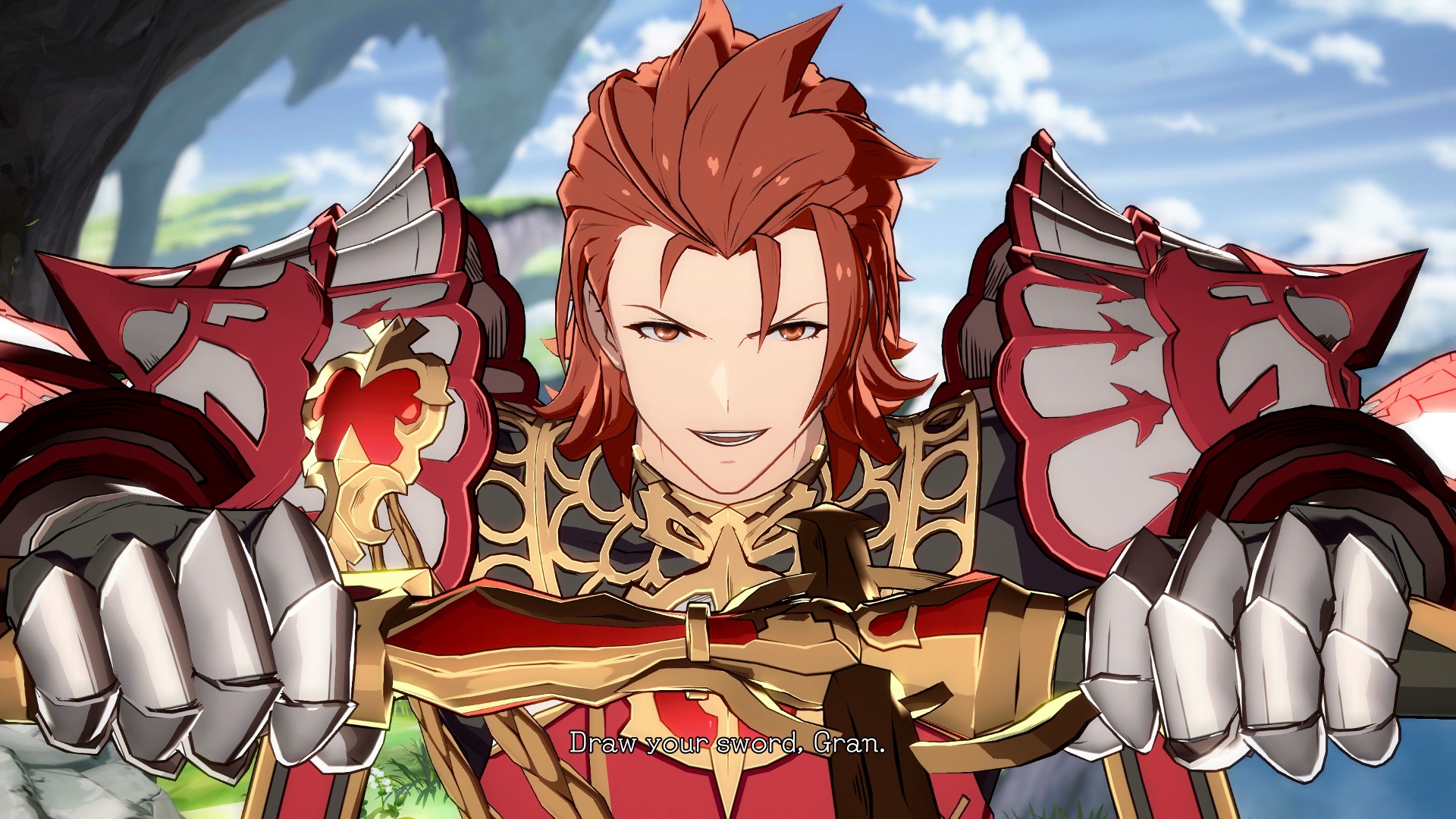 If you are familiar with the previous work of Arc System Works, they have developed something of a formula when it comes to creating fighting games. Their most distinctive features are usually the visuals, which are animated 2D with a 3D look closely matching the art style of the Granblue Fantasy series. They also tend to add highly useful tutorials that teach the players more about the game. Lastly, they usually offer a mixture of offline gameplay modes and an online mode where the lobby is composed of player avatars in a chibi-style. These are all present in Granblue Fantasy: Versus, giving the game a familiar but fresh perspective.

Granblue Fantasy: Versus is originally a role-playing game so to bring this into a fighting game engine, Arc System Works has opted to develop a special RPG mode that is part of the single-player story portion of the game. This RPG mode is separate from the traditional Arcade mode. It is something of a beat ’em up that works in a side-scrolling fashion and offers player customization. You can equip new weapons, go through various quests, and fight bosses. The story is told through a mix of cutscenes and conversations that flow in the style of a visual novel. It is a fun break from a traditional fighting game and feels like something offering well-developed lore and insight into the world of Granblue Fantasy. 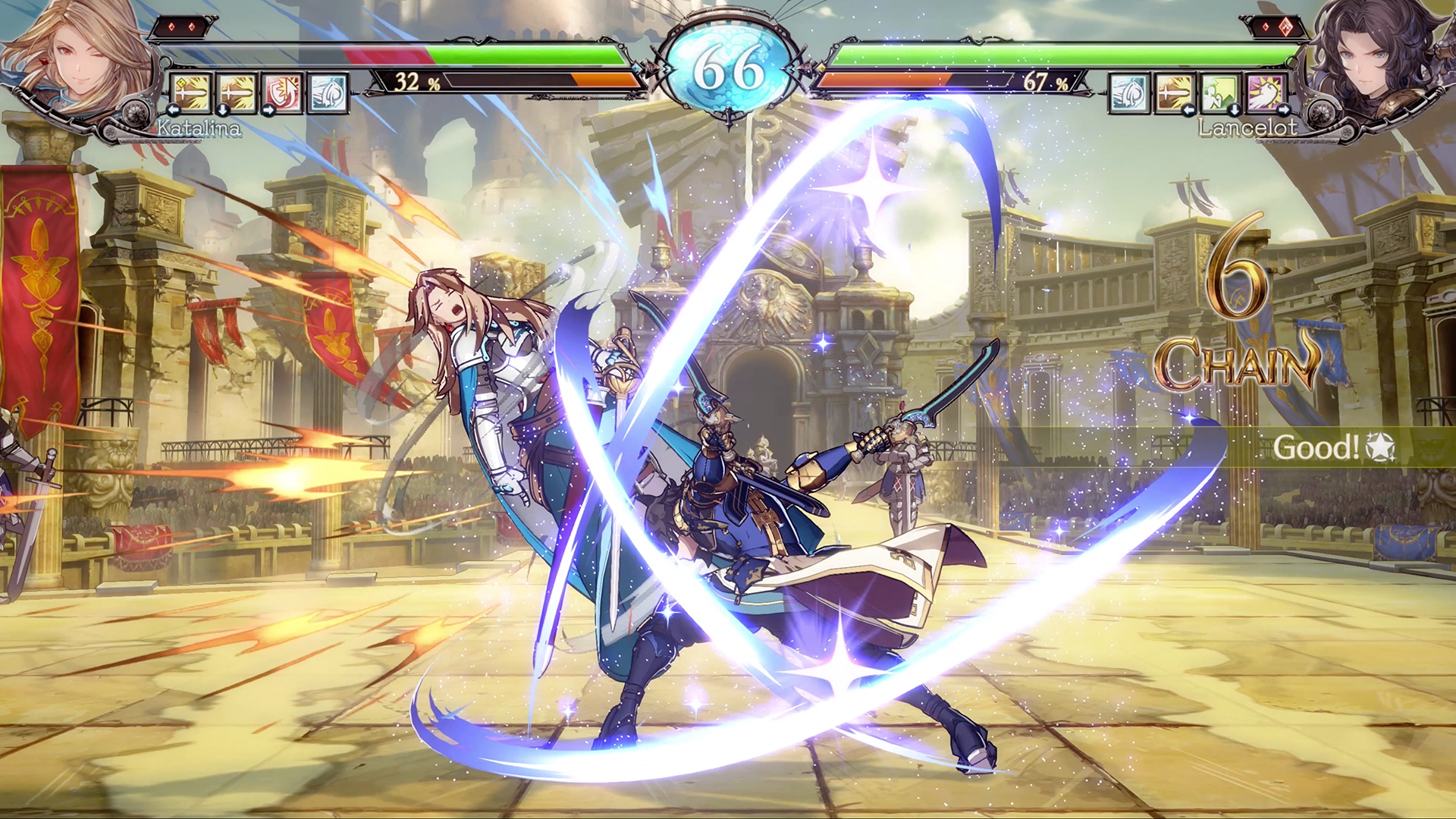 The fighting game engine itself is smooth and tailored for both newcomers and experienced users. The game uses a combination of attack buttons and special moves. What I liked about the combat was how easy it was to learn the various combos. All of the combos can be executed with timed button presses without any complex input, although the game does leave this choice open for those who are up for it. This means it is easy to get into a combo frenzy if you can master the timing of the attacks and learn to cancel them at the right time. Granblue Fantasy: Versus is a solid fighting game with mechanics that are easy to learn but hard to master, just as it happens with any other games in the genre.

Tutorials are useful if you want to learn the timing of combo moves and they don’t just teach the player the offensive side of combat but also focus on the defensive techniques like blocking and canceling out of throws. The RPG mode continues to challenge the player with new quests although the story feels like it is hard to grasp, especially if you have never played Granblue Fantasy in the past like myself. The characters and their motives remain fairly hard to follow but the game attempts to rectify this with a glossary that goes in-depth with the lore. 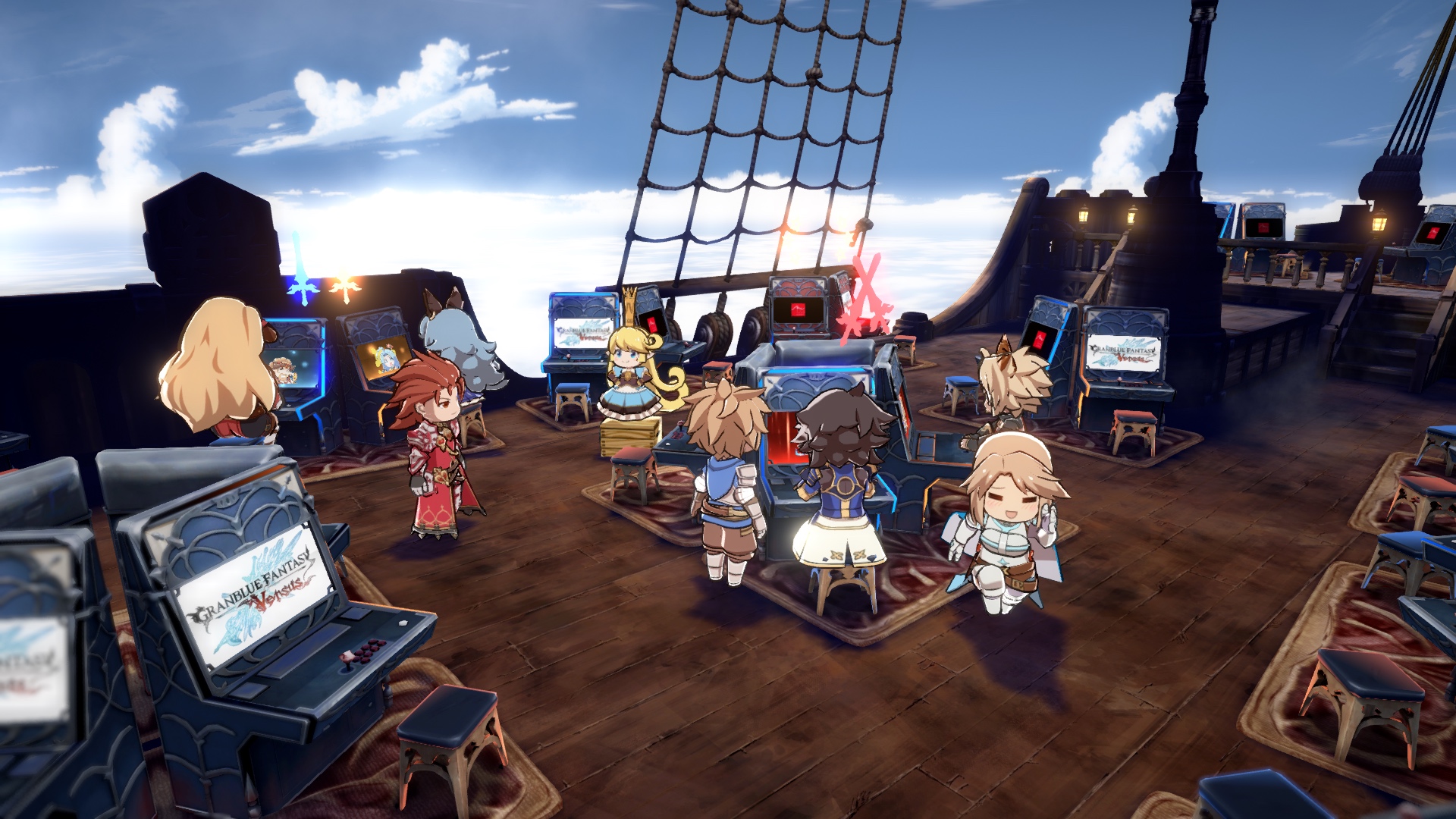 As a new fighting game, the character roster is a little on the small side and unfortunately, this is being filled out with downloadable content post-launch so fans who are still waiting to get their character in the game have to shell out extra money to get their DLC. If you can stomach it, the game does offer a decent value for money considering the amount of content that is packed in it. The story mode itself is long enough with hours of worth of content, and it adds a co-op mode later down the line if you want to attempt it with a friend, but there is the traditional Arcade mode and Online mode as well. The fighting mechanics are extremely refined to the point that this game could be a good contender in the eSports scene.

Granblue Fantasy: Versus is aimed at fans of the franchise instead of fighting game veterans, but it does a good job to reel in both users. Personally speaking, I didn’t enjoy the narrative offered in the main story mode but it is hard to dislike some of the characters which have a gorgeous design. It is not easy to pick one as favorite because they all offer a varied form of the combat system. Their special skills and attacks are unique to their character and it takes some time to master their moves, but if you can stick to a character, it should be technically possible. 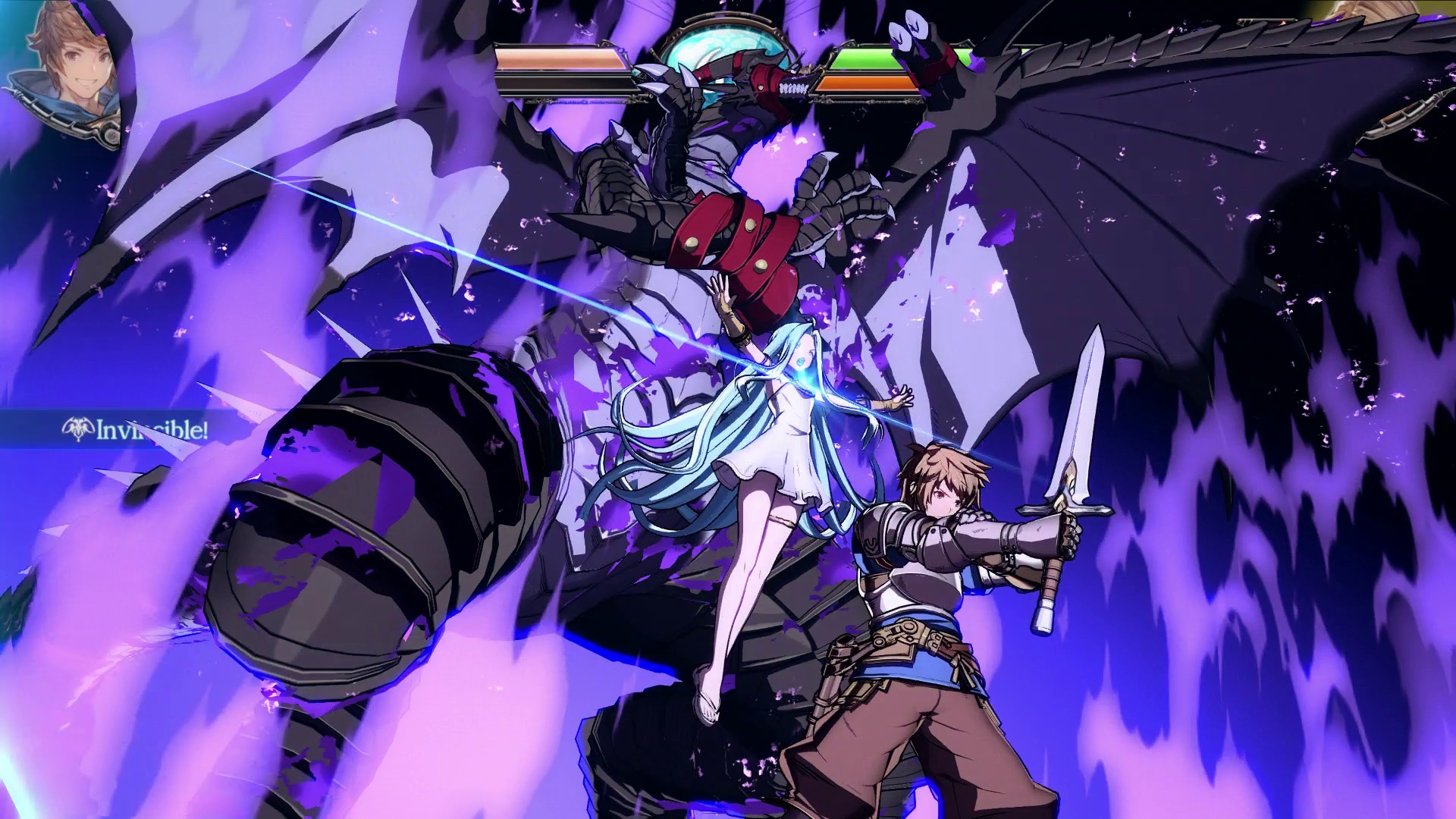 The online multiplayer has a pretty reliable net code and works out great with its lobby system. The net code is good enough to get basic fighting done and the lag is reduced to an extent, but I found some issues with matchmaking in the lobbies. The lobby system has been a staple of Arc System Works since Guilty Gear Xrd and they are still experimenting and innovating with different ideas. Overall, I would rate it as one of the decent experiences among the fighting genre where net code can be bad as in Street Fighter V or Mortal Kombat. 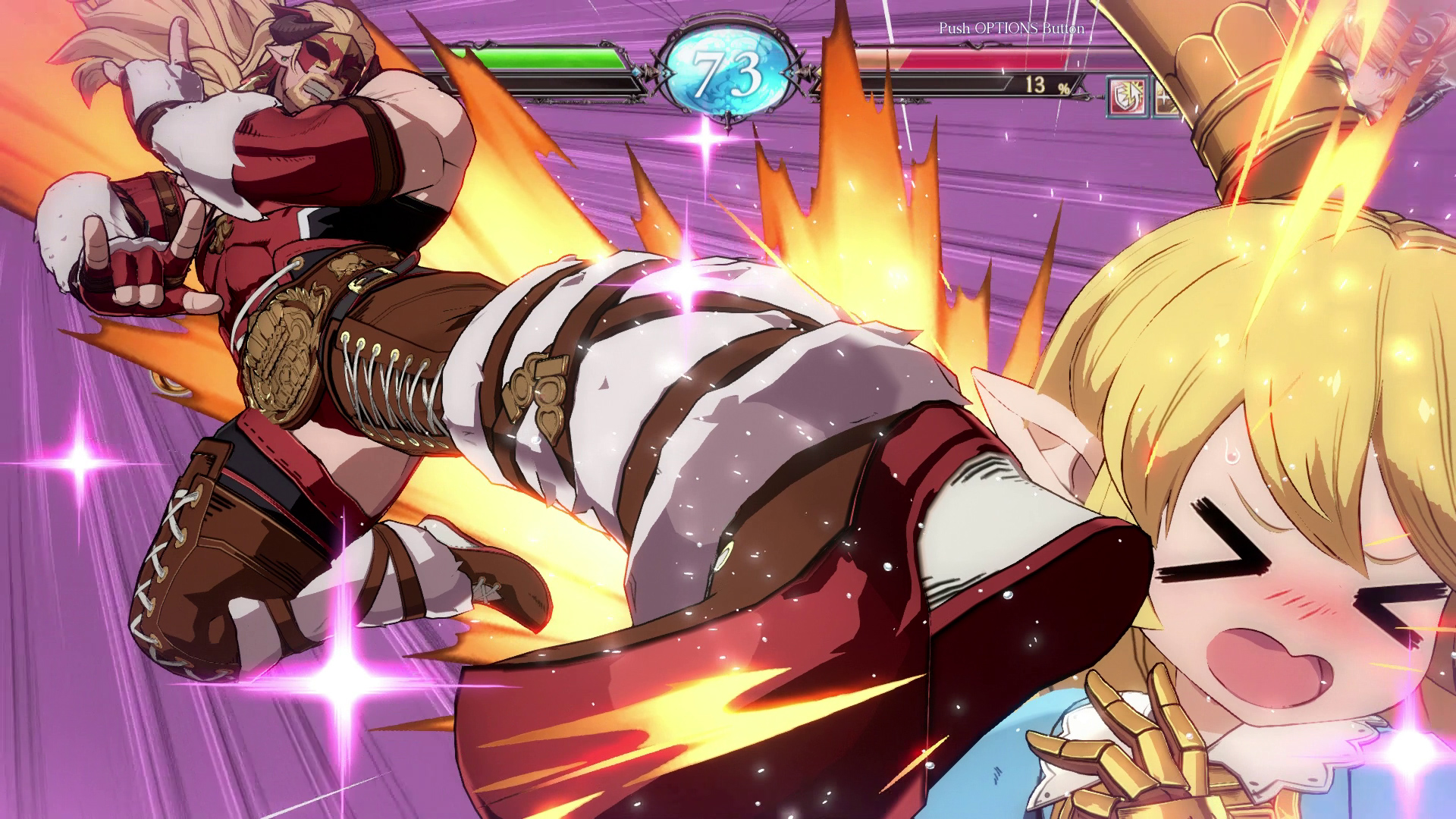 To conclude the review, I would say that Granblue Fantasy: Versus has managed to surprise with its high-quality fighting but the RPG mode, that has been heavily marketed, suffers from some flaws including the combat system itself. It is fun in the short term but the more you play it, the more obvious its flaws start to become. To add to the issues that I had, the idea to sell DLC characters so close to the launch of the game is also hard to swallow, but it is becoming common with Japanese fighting games this generation.

Granblue Fantasy: Versus is an ambitious spin-off based on the popular series that attempts to mix the fighting genre with RPG and succeeds with it.

Granblue Fantasy: Versus Closed Beta Invites Are Going Out Now
Ali Haider May 28, 2019

Granblue Fantasy: Versus Closed Beta Invites Are Going Out Now