God of War PS4 has received a new dynamic theme today for the PS4. What most won’t notice is that a new easter egg has been added to the boat seen in the theme.

God of War ended on a huge cliffhanger so a sequel is pretty much guaranteed. If you have played the game, it becomes clear that this could be aiming for a story that will be completed in a trilogy with most of the Norse Gods appearing near the end of it just like the first God of War trilogy.

Read More: God of War Director’s DLC Idea Was “Too Ambitious,” Could Have Ended Up “Being Its Own Thing”

Ragnarok is referenced multiple times in the game and while the first game attempts to steer clear of the events of the Ragnarok, it doesn’t shy away from teasing them. In the new dynamic theme that was released today, the developers have hidden a clever easter egg that is easy to miss.

The dynamic theme is available to download now on the PS4. Once you get it, you will notice that it is mostly the boat in this theme. If you look closely on the boat and you should notice a text written in runes on it. Here is what the text looks if we brighten the image a little. 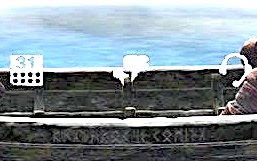 This translates to “Ragnarok is Coming” which is what the events in God of War will likely lead to for future sequels. Ragnarok is considered the end of times for Norse Mythology and it is hinted that the action of Kratos and his son Atreus leads to the start of events that trigger Ragnarok.

Previous Article
Days Gone Download File Size Is 67 GB, Has a Day One Update
Next Article
Rumor: Persona 5 The Royal Will Be a PS4 Exclusive, Not Planned For Nintendo Switch