Nintendo had just released a direct focus on indie games but they haven’t had another proper Nintendo Direct since E3 2019. Another rumor now hints that one might be due soon.

GameStop has listed around 18 new SKUs to their internal software and a leaked picture has been making the rounds online that shows this new update. It is not the first time SKU update has leaked in the past, and in this case, this seems to be another hint at a Nintendo Direct.

This leak was first posted and shared by Twitter user Sabi, who has accurately leaked information in the past especially at this year’s E3 and Gamescom. While the user didn’t say that it was for a new Nintendo Direct, it was implied that this might be the case judging from similar updates in the past. 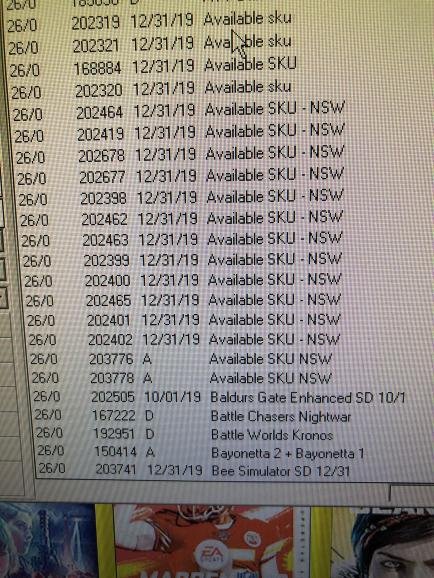 GameStop is one of the biggest retailers for video games so when they add so many unknown new SKUs which are all for the Nintendo Switch, it hints at a big dump of information and announcements, which is where the rumor about a possible September Nintendo Direct is coming from in this case.

Read More: GTA 4 Updated On Xbox One Again To Remove Old Soundtrack After Patching It Back

As far as the schedule for the Nintendo Switch is concerned, some of the big names that are hitting later this month include Astral Chain, Luigi’s Mansion 3, Pokémon Sword and Pokémon Shield. Nintendo also has Animal Crossing for Nintendo Switch set for a release later in 2020. Their upcoming games can still be announced as there are many rumors about new games that might launch in 2020 and beyond.