The Witcher Netflix TV Series Gets a Release Date

The Witcher is getting a series from Netflix. The release date for this upcoming TV Show has now accidentally leaked ahead of an official announcement.

The Witcher for Netflix is based on the books by Polish author Andrzej Sapkowski. It is a different story from the video games. The lead role of Geralt of Rivia is played by none other than Henry Cavil. He will be joining other cast members including Freya Allan, Anya Chalotra, and Jodhi May. The series is produced for Netflix by Lauren Schmidt Hissrich.

Read More: The Witcher 3 Will Launch On October 15 For Nintendo Switch

Netflix had debuted the first trailer for this upcoming fantasy action show this Summer. It was confirmed to launch later in 2019 but there was no release date for it. This has changed now as in a bid to share the release date of upcoming TV Shows, Netflix has also listed The Witcher along with other TV series. 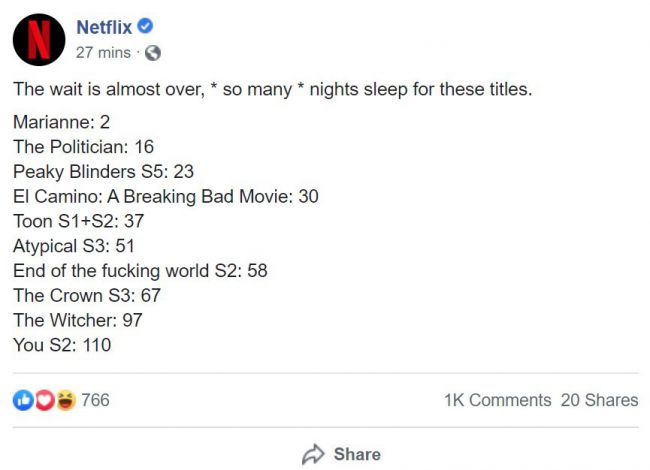 According to the now-deleted Tweet, this upcoming fantasy epic will be released on Netflix subscription service on December 17. It is cutting quite close to the end of the year. The popularity and quality of the TV series remain up in the air but the source material is good enough that unless the producers mess it up, it shouldn’t be that bad. There are likely going to be multiple seasons going forward if this is a success.

The method through which the release date was calculated was quite simple. Netflix had listed the days that were left in these upcoming TV Shows and with 97 days left, fans came up with December 17 as the release date. It is not official by any means but this is the only confirmation that we have for now unless it was an unintentional mistake by the company.

Netflix April 2022: All TV Shows and Movies Coming To Netflix

Netflix March 2022: All TV Shows and Movies Coming To Netflix

Netflix February 2022: All TV Shows and Movies Coming To Netflix