CDPR was taken back by the surprise decision of Sony where they simply delisted Cyberpunk 2077 from their store, and it apparently didn’t sit well with them.

CD Projekt Red’s Head of Studio, Adam Badowski might have been quiet in the recent debacle that surrounded the launch of the game, especially on the last-generation consoles, but his Twitter account appears to suggest something else.

Adam Badowski was active on the social media platform this Friday when after Sony announced that they have made the decision of removing Cyberpunk 2077 from the PlayStation Store. He ended up liking seven tweets that all criticized the decision of Sony removing the game from their digital store. 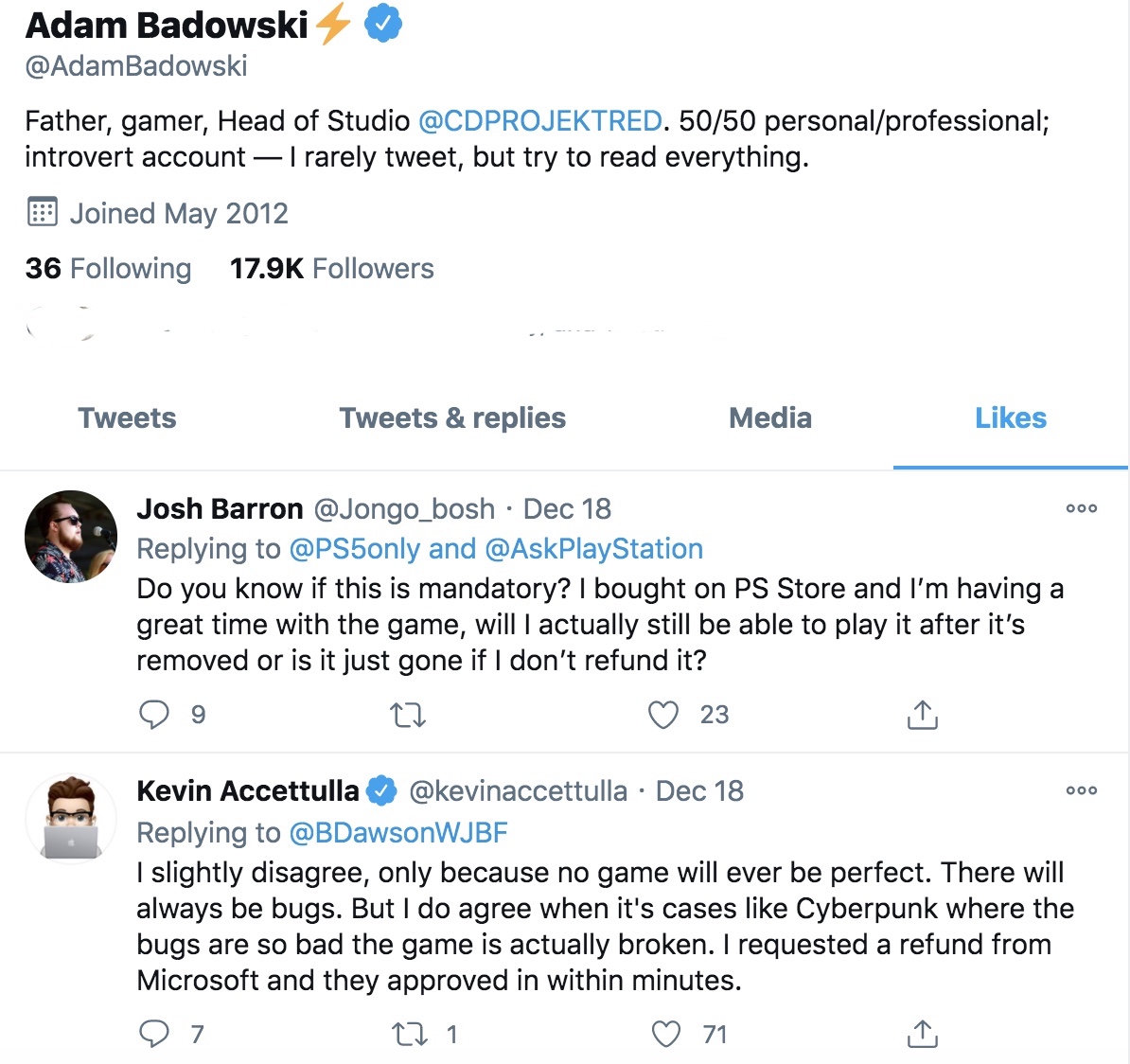 One of the tweets compared the launch of Cyberpunk 2077 to Marvel’s Avengers suggesting that it launched in a ‘worst’ state. Other tweets were vocal about the refunds and delisting the game. One of them talked about how Sony is taking offense over the refunds issue and removing the game as a result. Adam’s viewpoint apparently lined up with these tweets enough for him to like them.

After Sony had delisted the game, CD Projekt Red issued its own statement on that matter. They made it sound like it was a mutual decision when it apparently wasn’t the case. After the launch of the game and when CD Projekt Red initiated their refund program, they had an investor’s call in which they straight up said that the platform holders weren’t notified about the refunds and would have to deal with them on their own.

Following our discussion with PlayStation, a decision was made to temporarily suspend digital distribution of Cyberpunk 2077 on PlayStation Store. You can still buy physical versions of the game in brick and mortar stores and online. All purchased digital and physical copies of the game will continue to receive support and updates as we continue to improve your experience.
According to our knowledge, starting today, everyone who is not willing to wait for updates and wants to refund their digital
copy of the game, can do so by submitting a request at https://www.playstation.com/cyberpunk-2077-refunds/.
We are working hard to bring Cyberpunk 2077 back to PlayStation Store as soon as possible.

As it stands, there is no timeline on when the game will be relisted on the PlayStation Store. In the meanwhile, Microsoft has also added a warning to the game on their Xbox Live Store.