DOOM Confirmed For Xbox Game Pass In a Hidden Tease

The official Xbox Game Pass Twitter account had hidden the name of the next major game, DOOM, in a tweet that was cracked by a fan rather quickly.

Microsoft has acquired Bethesda Softworks’ owner Zenimax Media as confirmed yesterday. This acquisition was eventually going to lead to the games that are published by Bethesda to make their way to Xbox Game Pass and now this was confirmed through a teaser that was shared by the official Xbox Game Pass Twitter account.

Read More: Elden Ring Is Larger and Deeper Than Anything From Software Has Done Before

It started to tease a new game coming to the Game Pass subscription. The tweet was an image that was an email sent to a supposedly fictional person in charge of the service. The letters of the tweets spelled “Look Below” and one fan was clever enough to figure out it meant adjusting the colors of the image. 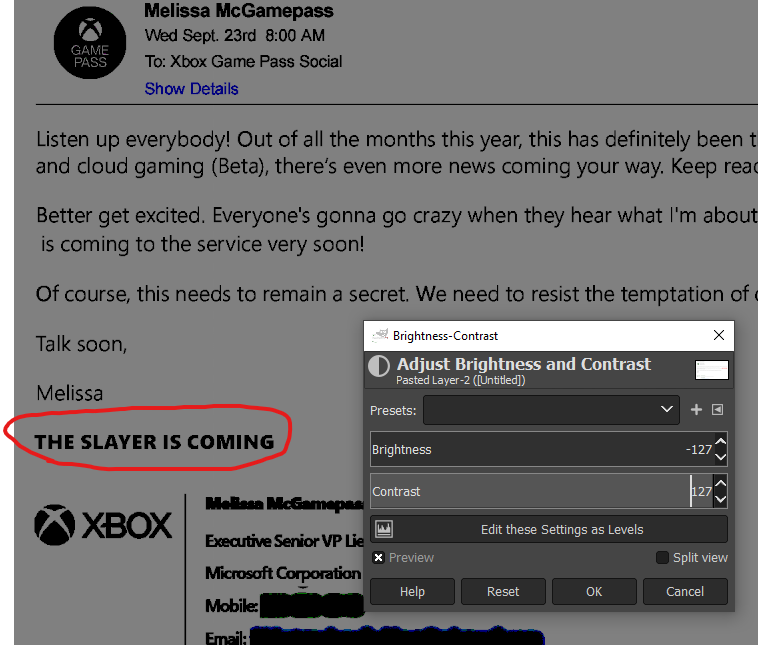 As a result, once the colors were adjusted which mainly boiled down to tweaking the brightness and control, the message that was hidden at the end of the email simply said: “The Slayer is Coming”.

Read More: Dead Cells Update 1.17 Is Out, Here Are The Patch Notes

Previous Article
Rainbow Six Siege Update 1.94 is Out, Here Are The Patch Notes
Next Article
New Xbox One Feature Allows To Download Games Without Purchasing Them

DOOM Trilogy Online Activation Will Be Made Optional With An Update
Salal Awan July 27, 2019

DOOM Trilogy Online Activation Will Be Made Optional With An Update