Tom Clancy’s Ghost Recon Breakpoint will get a beta test in early September. Here’s how you can pre-load the beta, its download size, and other details.

Tom Clancy’s Ghost Recon Breakpoint is the next mainline game in the Ghost Recon series. It will be out later this October for PS4, Xbox One, and PC. The game was first revealed earlier this year by Ubisoft.

This beta test is only available for those who have pre-ordered the game or registered for the beta test. Registration doesn’t guarantee a code for the beta test since users will be randomly picked for it. If you participated in the Online Technical Test for the game, you will be automatically given access to this new beta test. 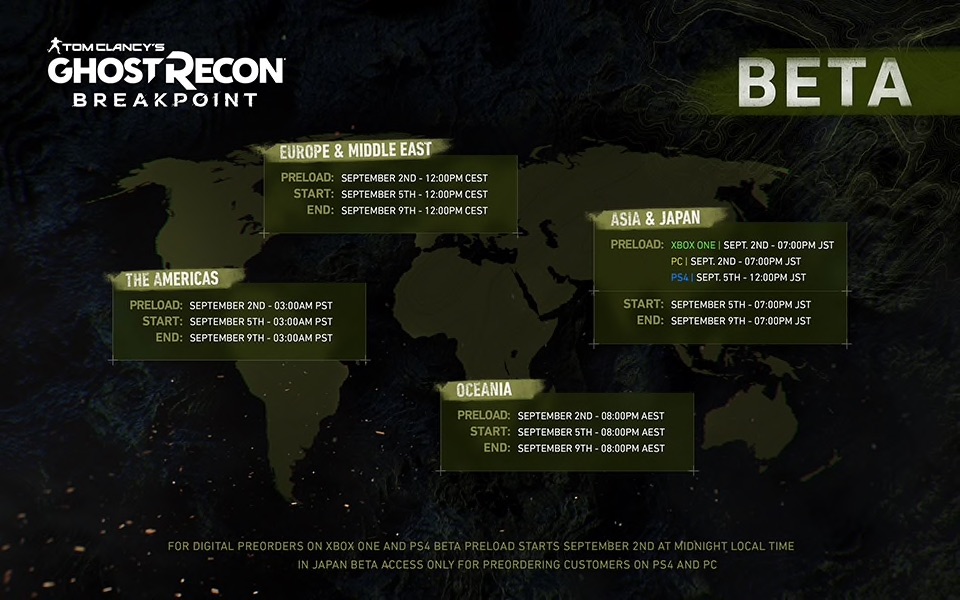 As for how to start pre-load for Ghost Recon Breakpoint, you can refer to the world map to find out the pre-load timing depending on your region. The pre-load will be available on PS4 or Xbox One depending on the store. You will have to start the download and download the client before waiting for the servers to go live on September 5th.

The following gameplay content was confirmed to be available in the current beta test. This is in addition to three different drone areas including Murmurs, Aamons, and Behemoths.

You will have access to the following four regions:

Ubisoft has confirmed that the beta is not under an NDA so feel free to share videos or screenshots from it. The full game is expected to arrive on October 4, 2019.

Previous Article
Sega Europe: No Plans for Yakuza Ishin and Kenzan Release In West
Next Article
Days Gone Update 1.41: What’s New and What Are Patch Notes